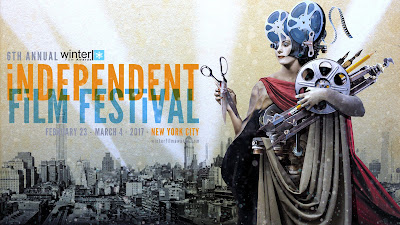 I received an email earlier today from the Winter Film Awards Festival in New York. Its runs February 23rd until March 4th.

To be honest I figured I would take a quick look at the email and then cut and paste something and move on for the evening- but something happened-I started to look at the films and the schedule and I became intrigued and I lost myself as I bounced from film to film. There is something about the selections that have intrigued me and I've gone from kind of shrugging off covering the festival because of conflicts (I have things outside of the film world cooking) to actually trying to go because some of the titles intrigue me.

I'm still working stuff out but this looks to be a fest for those of you for a bend toward inde films may want to check out.

To give you an idea of what is happening I'll quote part of their email:
Among our awesome official selections is a diverse mixture of 11 Animated films, 8 Documentaries, 11 Feature narratives, 10 Horror films, 12 Music Videos, 24 Narrative shorts and 7 Web series, including 12 student films and 33 first-time filmmakers. Filmmakers come from 30 countries; 42% of the films were created by women, 45% were created by people of color.

For more information, film title, tickets and the like go here.