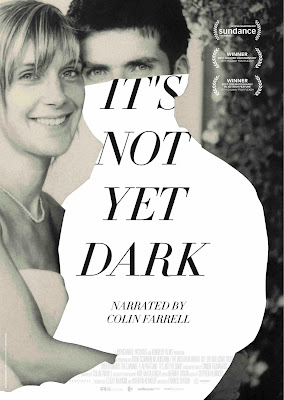 I discovered the work of Simon Fitzmaurice when I saw his film MY NAME IS EMILY at the Toronto Film Festival . This unsentimental love letter to being alive was one of the best films I saw in 2015. What was extraordinary about the film is that Fitzmaurice directed the film from his wheelchair while on set via his computer. That may not sound like much but Fitzmaurice has full on Motor Neuron Disease (aka ALS) and can not move anything except his eyes.

After my review ran I got an email from one of Fitzmaurice's cousins. The family had seen the review and were happy that I liked the film. It was suggested that I track down It's Not Yet Dark Fitzmaurice‘s autobiography (it gives this film it’s title) because it told the whole story of the disease. I purchased a copy but I never read it.

And now it has been turned into a moving documentary.IT'S NOT YET DARK the film will make you feel good.

Filled with video and pictures of a man living life to its fullest regardless of his state. It is a beautiful portrait of a man who refuses to go into that good night. A poet and writer who turned his love of film into his life’s work Simon Fitzmaurice is truly driven my the things he loves. While film is his vocation, he will not leave his wife or his family without a battle and  he is determined to win. When the doctors in Ireland asked why he wouldn't turn off the machines keeping him alive he gave Wesley's answer in THE PRINCESS BRIDE when miracle Max asked why he wanted to live - True Love. Fitzmaurice loves his family above all else and will stay with them as long as he can.

Simply put, this film, like the feature MY NAME IS EMILY, is a glorious fuck you to death. Just because the doctors say you should go Fitzmaurice will assure you that you don't. This is a wide eyed look at a man with hope despite the odds and what he has been told. If you're feeling down this film might help you find away back to the light because it says you too can fight.

The steel bar backbone of the film is the narration by Colin Ferrell. Taken, from the Fitzmaurice's own words it makes clear that despite a failing body he has a great mind. The turns of phrase and explanations cut right to the point and we can instantly feel what he is feeling. This is further borne out by the words spilling out of his computer. He is a man soaring despite being tethered to an anchor. Now that I'm done with the film and this review I'm going to dig out my copy of the book and read all of Fitzmaurice's words.

I was moved. This is a film that is frequently as good as a cinematic biography can be. Its a film that transcends the genre to become a work of art in its own right.

If I had any complaint it would be that some of the talking head interviews come off as too conventional. While they are absolutely necessary to the film, filling in details we can’t get any other way, the way they are filmed, static images, stand out from the rest of the film which is a flurry of activity. On the other hand I have no idea how you might have fill them any other way.

Bumps or no-I love this film- this is a joyous celebration of a single life, the family around it and of every living person on the face of the earth. I can't wait for this to get a release and circle the fests so I can get people to see it. 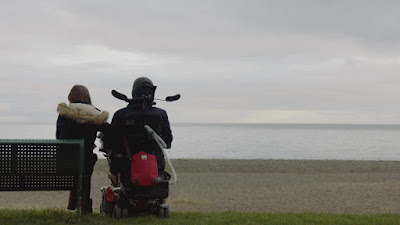