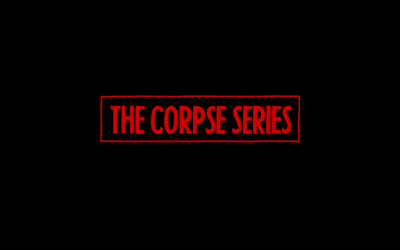 Screamingly funny, incredibly bloody and very often in poor taste story of two friends who are living together who have a problem- one of them keeps killing people and they then have to get rid of the bodies.

Faced paced series is divided into seven chapters of escalating mayhem. What begins as an accidental killing of a hooker becomes an ever increasing series of mishaps as the pair tries to deal with a body only to be interrupted resulting in the accidental arrival of another body... and then another...and another...and....

Twisted beyond words and always laugh out loud funny THE CORPSE SERIES is an absolute delight. It is a perfect poisoned confection of the highest order. This is a film that has more laughs per minute than almost any comedy of any type and certainly more than any horror comedy of the last twenty years. This may very well be the top of the heap of horror comedies, certainly of the modern gore era.

This is the sort of film I want in my collection because I really want to show it to all of my friends who love horror and things ghoulish.

If you love blood and guts and laughs I can't recommend this film enough.

This film plays Sunday night and repeats on the Thursday night of horror,

For more information and tickets go here.
Posted by Steve Kopian at February 23, 2017