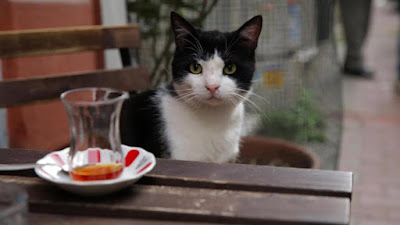 I saw KEDI last year at the Milwaukee Film Festival right before it was rightly snapped up for a wide release by Oscilloscope Laboratories. Its a great film- especially if you love cats. Now itis opening Friday and its a must see
---

Without a cat Istanbul would lose its soul.

I’ve been trying to come up with a clever way to review KEDI but ultimately it comes down to asking you a single question: Do you love to watch cat videos?

If you don’t love to watch cats being cute then skip this post and this film and go do something that involves blowing things up.

If on the other hand you love cat videos then make your way to the Milwaukee Film Festival and buy a ticket and be ready to ooo and ah for 80 minutes.

KEDI is a gorgeously shot film that is a love letter to Istanbul and all of the cats that live there. This is the film that the Turkish government should be sending out as advertising because the city looks so amazing and the people appear to be so friendly that I wanted to book a flight just to see the city, never mind the cats.

As for the cats they are an adorable bunch. We watch as they run all over the city, take care of their own and are tended to by the various inhabitants of the city. It’s a joy to see so many people care for such loving creatures. Its also a joy to just watch the cats go through their paces.

Highly recommended for anyone who loves cats. Those who hate cats need not apply
Posted by Steve Kopian at February 06, 2017