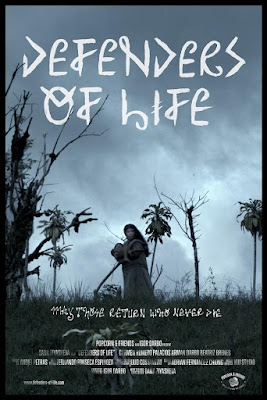 The problem with underage marriage is a serious problem in some parts of the world. In many cultures, older men take child brides which often results in the death of the women when their much too young bodies attempt to give birth to babies not much younger than themselves.

Filmmaker Dana Ziyasheva takes a look at the problem in Defenders of Life, a film about an anthropologist and her son who go to record the lives of the Ngäbe. There they become friends with Carmen and her granddaughter Esmeralda who is learning the ways of the world. Things take a dark turn when the young girl becomes engaged to a much older man.

I’m torn about this film. As a portrait of the Ngäbe people, the film is excellent. It’s a film that nicely puts us among them and teaches us about their vanishing way of life. On that level the film is worth seeing.

The trouble is the film makes two missteps, either of which would be fine, but together seriously weaken the film. First the film is largely told from the perspective of the anthropologist and her son. While this gives us a reason to be told the story, it doesn’t really fit the tale and makes it less real. The other problem is that the film is very much a strident message film. Almost from the first frame, the film takes a stand that it is about something. That would all be well and good but I don’t want to be force fed something that is good for me. It would have worked had the story simply been told from the perspective of Esmeralda and her grandmother but adding the outsiders  changes the dynamic in such a way that the film feels preachy. It puts our own morals front and center and makes us compare our way of doing things to those of the Ngäbe. It lessens the impact and puts in bumps that shouldn’t be there.

I don’t hate Defenders of Life, but I only kind of like it.