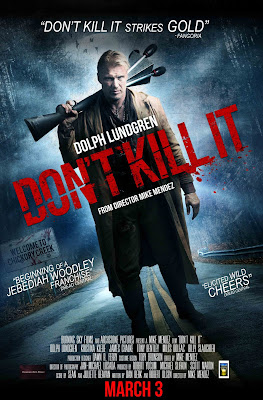 Dolph Lundgren is Jebediah Woodley demon hunter in DON'T KILL IT and with it Lundgren has found what could be his iconic  role.

The plot of the film has a body hopping demong getting lose in a small town in the American South. First possessing a dog it then jumps to its own after it dies, The hunter then kills his family before killing the family next door and being killed in turn... As the town reels from the deaths the FBI comes calling as does Woodley who thought the demon had been locked away years before.

Bloody as all hell, funny through out and occasionally scary DON'T KILL IT hopefully will be the start of a long series of films- or even a TV series. Woodley is guy who has been around the block way too many times and knows how it goes, even to the point of knowing no one will believe him. A vaping man of cocksure swagger Woodley knows exactly what to do at all times, unfortunately it takes awhile before anyone will listen to him.

A film of pure entertainment, this film plays like an old school B horror film or one of the best SYFY originals. This not to imply anything bad about the film- hell I want to see this film again and I want everyone I know to see it- rather I want you to get a sense of what the film feels like. This is the sort of film you will return to again and again- probably on rainy Saturday nights with a big bowl of popcorn.

That the film works as well as it does is entirely thanks to Lundgren who wanders through the film with a world weariness that seems to match his own way of being.Walking across the screen with a take no prisoner attitude one can't help but be drawn to him. Sure there seems to be a hint of tongue in his cheek as he goes through his motions  but it becomes endearing and part of the character. It's the sort of a performance where you can't imagine it not leading to more appearances.

This is a great great horror comedy action film. Yes it's low budget but it's a hell of a lot of fun

While I can't in good conscious call it one of the best films of 2017, I can call it a favorite and probably one of the few films from this year I know I'll watch 20 or 30 times before now and the demon apocalypse

Highly recommended when the film hits theaters and VOD Friday