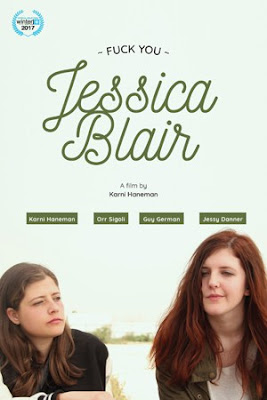 Karni, a detached Israeli meets New Yorker Jessica Blair who is on holiday. As the pair wander through the Israeli countryside they meet up with two Israeli men who, along with Jessica, begin to make her rethink the way things are.

A perfect copy of many American inde comedy buddy films JESSICA BLAIR is a highly intelligent often very funny film that in many ways is better than it's American counter parts. Part of the reason the film succeeds is that its setting and set up are better than the run of the mill. We are not in typical yuppie/hipster land so we don't instantly know the characters. Yes we can make some connections to types in films past but here there is enough variation that things aren't exactly that way. Additionally writer director Haneman doesn't have the characters introduced to us she drops us right into the action and we are left to fend for ourselves. I have to applaud her for treating the audience as a bunch of people who don't need to be spoon fed.

The problem with the film is that Haneman has over written the dialog. People don't act, they talk in long sequences that just go on and on. While the film is full of funny exchanges they all sound scripted. Jessica who is supposed to be from New York doesn't sound authentic but rather as if she were someone's idea of a New Yorker. At times the film plays as if it were meant for the stage with many sequences having limited cuts or camera movements. That's not bad but it makes you wonder how the film was put together. It doesn't quite work and it makes the film feel like Haneman was trying too hard to get everything perfect. She manages to get it but at the cost of the film not seeming real.

I want to suggest that Haneman has spent a bit too much time studying the verbal acrobatics of Kevin Smith or Quentin Tarantino who craft long perfect exchanges of dialog and monolog that sound great but which no one would ever say in real life.

Problems with perfection aside JESSICA BLAIR is a pretty good film and will be worth your time when it plays eventually at a theater near you
Posted by Steve Kopian at March 01, 2017