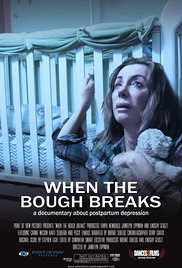 Hitting Available on iTunes today is WHEN THE BOUGH BREAKS which is an examination of Post-Partum Depression which effects one in five women.

The film is an important one that deals with all parts of the issue including the not so happy subjects of infanticide and suicide. This is a tough film but a vital one because it not only shines a light on the subject but it deals with all aspects.

You will forgive me for not saying more. I don't know if there is anything else I really can say since its incredibly hard to critique a film such as this. The best I can say is the film is really well done and if the subject interests or effects you you should take a look.
Posted by Steve Kopian at March 14, 2017