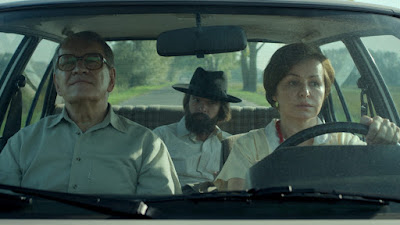 Covering Beksiński's life over an almost 30 year period through the ups and downs this film truly is an arc of a life. We watch as Beksiński paints, deals with his occasionally flighty son, and is grounded by his wife. The film doesn't unfold as a typical narrative film but rather as something approximating life. SOmewhere about fifteen minutes in I stopped thinking about the film as a film and instead viewed it as a documentary of life.

The reason the film works is not for any great reason but the small one. ts all in the details. An attack or arachnophobia is funny, but how it plays out and how Beksiński reacts is very real and not played for laughs. There is a real connection between the actors. A scene where the son comes in to ask his mother to talk his girlfriend out of the bathroom has small touches such as son eyeing his father in such a way to let us know that he is completely embarrassed. There is sense of life in it. Even the end of the film plays out not as a film but as one of those weird ways things go wrong. The sense of  how right the film is was reinforced as the film closes with video footage of the Beksiński family and you see how perfect everyone is.

I am in awe of this film. This is one of those films where I got to the end and wanted to jump in and watch it again right then simply because I needed to see if I really saw what I did.