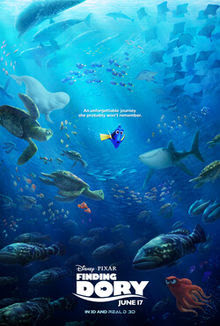 My displeasure at Finding Dory is such that I have to wonder if Pixar has lost its touch. A needless sequel it annoys more than it charms.

The plot has Dory remembering her parents and deciding to go find them she heads across the ocean to an aquarium where she hooks up with an octopus who wants to be in a place where he will be taken care of and left alone. Meanwhile Marlin and Nemo try to get in to the place.

Feeling more like a series of set pieces then a story the film intentionally brings back most of the characters from the first film whether they belong or not. Most are cameos that that feel shoe horned in. The plot moves from room to room in the aquarium seemingly based on have we rung every joke out of this situation. Yes it results in some great pieces- the otters- and some of the stuff with the octopus- mostly it feels artificial

The biggest problem with the film is the characters. In some cases some of the old characters don’t seem to work. Marlon seems whiney instead of protective. Many of the new characters seem like sitcom refugees (almost anyone Dory interacts with) while suddenly the world is full of creatures who aren’t anthropomorphic. The otters have personality but no characters, and a squid in the first act is a sea beast and not like anyone in Nemo.

The biggest problem is Dory herself. Pushed forward you realize what a limited character she is. The mantra “I have short term attention deficit disorder is repeated way too many times. While I am not offended by the running gag as some have been, I did run out of patience and after 15 minutes I began to physically wince each time it was said. Talk about one note- this is going in the dictionary as the very definition. It seems like it’s every third or fourth line.

While I laughed and smiled at bits (the otters and octopus in particular) mostly I was a annoyed.

I can’t recommend actually paying to see the film
Posted by Steve Kopian at March 02, 2017