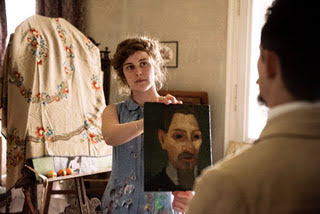 One of the gems of this years KINO, PAULA is a portrait of Paula Modersohn-Becker who in the span of roughly seven years produced 750 paintings and over 1000 sketches. She was the first female painter to have a museum built just for her works.

Covering the period when at 24 she was given an ultimatum by her father- get married or get a job- and taking her to her untimely death PAULA is a glorious portrait of an artist as force of nature. Paula does what she feels because she knows its right. PAula doesn't get a job, though she does eventually marry.

A mix of old school story telling with modern frankness PAULA is a refreshing reinvention of the artist bio. This is a film that feels lived in, thanks to the gorgeous cinematography and the note perfect performance by Carla Juri who seems to be possessed by Paula.

This must see film is the opening film of this years KINO and is highly recommened
Posted by Steve Kopian at March 27, 2017