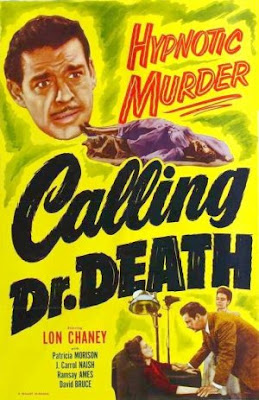 First of the Inner Sanctum film series from Universal that  starred Lon Chaney Jr as different characters in each film. Based on the Simon and Schuster book series and subsequent radio series the films are in their ways early film noir thrillers.

In this first outing Lon Chaney plays a neurologist who treats his patients with various means including hypnotism. His marriage is crumbling. When he wakes up one morning in his office with no memory of the previous two days he learns that his wife has been murdered. Having had a nightmare about killing his wife he thinks perhaps he may have done it. Despite his wife's lover being arrested and convicted of the crimes his guilt remains and he works with his nurse to try and unravel who done it.

Solid mystery is much meatier than many of the similar program series of the time. This is a full on murder mystery with lots of clues, well drawn characters and real sense of mystery. While on some level we can deduce some of what happened we can't get it all which makes the film more fun.

An interesting thing that the film does is giving us Chaney's inner voice. We hear what he is thinking at times and it's done so expertly that it helps to keep us on edge since we are given access to the same doubts that the character is having- he really doesn't know what the real story is either.

I'd always heard mixed things about the series, but based on the films I've screened so far I think the series is pretty damn good. The series plays similarly to the Whistler film series which started four months later and continued in eight films to 1948 in that other than being mysteries and the lead actor none of the films were related. It was a ballsy move on the part of the studios which resulted in series of solid stand alone mysteries but one that audiences couldn't get a handle on because of no reoccurring characters.

I recommend the film, moe so since the entire series is out on DVD  so you're getting six films for a reasonable price.
Posted by Steve Kopian at March 10, 2017