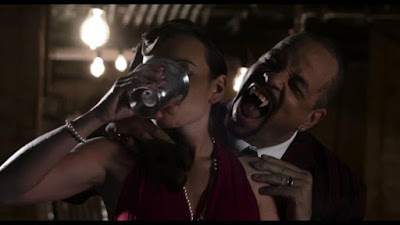 BLOODRUNNERS is a goof. A direct to video period vampire film it has the feel of a bunch of friends getting together to tell a good story and to have a good time. This is not to imply that this is a bad film rather that it completely enjoyable, but not necessarily scary.

Taking place in 1933, the tail end of prohibition, the film follows corrupt cop Jack Malone as he goes about shake down bootleggers. When he tries to shake down a new speak easy/jazz club he finds himself in over his head when he discovers that the man running the club (Ice T) isn’t just a mean jazz trumpeter but an ancient vampire who isn’t interested in hooch.

Seemingly made with tongue in cheek and with a desire to play dress up BLOODRUNNERS is a great deal of fun. Once you realize that the film isn’t going to be a nonstop scare fest- it’s more a prohibition crime drama for most of it- the film settles in and becomes the sort of thing is perfect watching on the couch with a big bowl of popcorn on a rainy Saturday night.

First the film isn’t content on just being on thing. Not only is it a vampire film but it uses those tropes to turn the prohibition crime drama on it’s head. Things don’t go as expected. On top of that writer' director Dan Lantz does something that most writers of the last five or six decades never do and that is tie the character back to the First World War. Say what you will, Lantz brings in the Great War to stunning effect. The was something that hung over the whole lost generation and prohibition but once the Second World War happened people and especially Hollywood stopped referring back to it despite it haunting everyone who was there.

The second reason the film works is that cast is into the film. To be certain it’s clear at times that they are having a little too good time playing dress up, but at the same time they are clearly into what they are doing. There is real delight in the making of the film. Ice T is wonderful as the lead vampire. He is having a blast playing a jazz age trumpeter/bootlegger/vampire and his delight carries over. It’s a role that is going to be a revelation to anyone who only knows his music or his role on Law and Order SVU. He is so good that it’s entirely possible that he may lose the type casting and be able to take on other roles.

I had a blast seeing BLOODRUNNERS. While it isn’t the scariest film ever made it is a great deal of fun and I smiled all the way through.

Definitely worth a look when the film hits home video and VOD on March 7
Posted by Steve Kopian at March 04, 2017