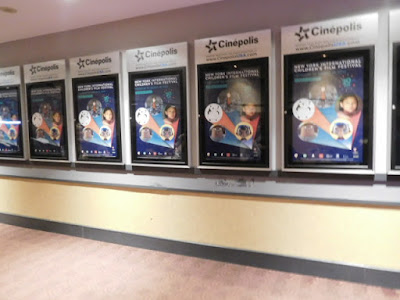 This weekend I saw 62 movies at the New York International Children's Film Festival- lest you think that impossible consider that 61 of them were in five shorts collections.  I SHorts 3 on Saturday after BORN IN CHINA and I saw the remaining four collections on Sunday one after another.

I have to say that my experience Sunday was why I love to go to the festival. The volunteers are amazing, the kids are wonderful and the parents are great. I spoke with any number of people and everyone was completely charming. Everyone who was there for more than one screening was talking to each other. Don't kid yourself the people are the real reason that NYICFF is one of the best fests in the world.

Rather than giving each collection their own slot I'm stringing them all together. Here is word on the five collections I saw this past weekend including brief word on all the films.

I do have to say that the visual art of the films-all the films even the ones I didn't like- were stunning this year and make even the bad films worth seeing. 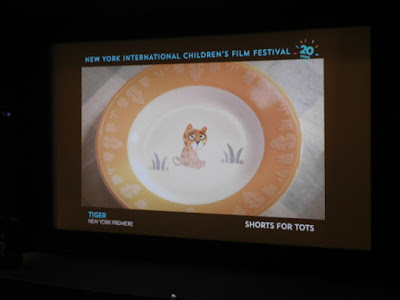 SHORTS FOR TOTS
Charming collection of shorts. For tots? Oh heck no....this is great stuff for anyone
1MINUTE NATURE: SQUIRREL & HAMSTER
Two films in a series of one minute animated documentaries. One about a boy and the squirel living outside his window. The other about a pet hamster. They are amusing.

THE BIRDIE
A bird and hippo meet and become friends. Utterly charming.

BRAZEY
Shape shifting Brazey dances. A small trifle that will make you smile. 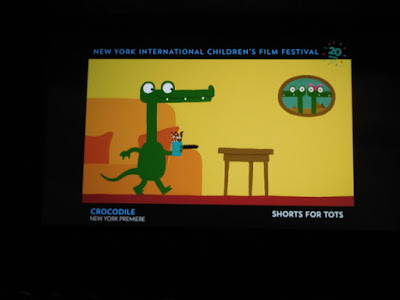 CROCODILE
A crocodile has trouble getting pretzel sticks into his mouth. Amusing.

EAGLE BLUE
An eagle flies off to get food for her chicks. Good

HEAD UP!
A goat teaches his dad sometime the best way to do something is a new way. Very good.

A HOLE
Absolutely charming film about a young girl and her friend, a hole. I loved this- its just so absolutely loopy

I AM NOT A MOUSE
If you've ever been called a nickname by your parents and hated it- this film is for you.

IN A CAGE
Wondrous story of a bear in a zoo who takes care of a bird. This has an absolutely infectious score that had several kids singing it after the film. One of the best films at the festival. 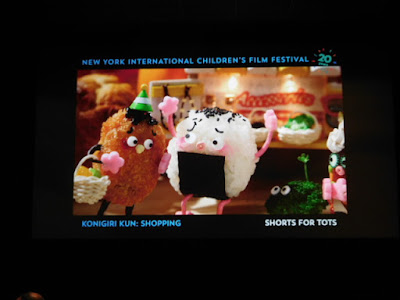 KONIGIRI KUN: SHOPPING
Delightful film about a rice ball going shopping. A wonderful visual delight with so many cool things I could spend an hour listing them. Instead just try and find it.

THE MOLE AND THE EARTHWORM
A mole chases an earthworm only to find it's not a worm at all. Absolutely beautiful film is heartwarming, 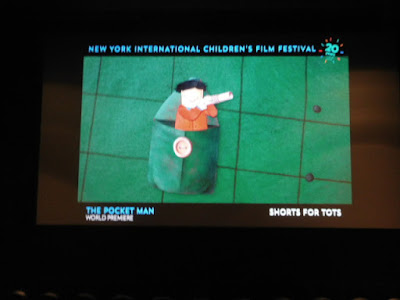 THE POCKET MAN
A tiny man living on the street finds kindness has its rewards. Good.

THE SLED
A squirrel discovers a sled and well one thing leads to another. A delight from start to end of the credits.

TIGER
A cute little film about a tiger on a plate who is hungry. 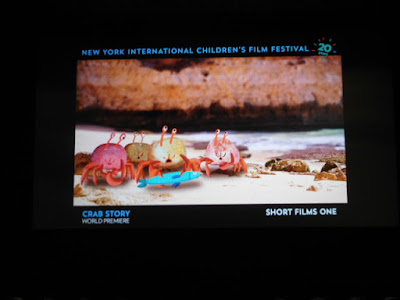 SHORT FILMS ONE
Absoutely the best of the fest- and one of the top collections from the 20 years of the festival. There is some super films here.
1MINUTE NATURE: BLACKBIRD & QUEEN OF THE NIGHT
More minute long nature docs the first about a baby blackbird that was rescued and the other about a cactus.

BIG BLOCK SINGSONG: WIZARD
As with all Big Block Singsongs its a catchy tune about a wizard who is a whiz at everything except wizardly things. Many of the repeat viewers were still talking about this at the end of the day.

CRAB STORY.
A bunch of grabs have decided that what ever is in that pineapple is their god. A funny little film.

MR. NIGHT HAS A DAY OFF
Utterly delightful film about what night does during the day- cause mischief. I saw this several times (it ran before features) and I laughed every time.

OUTDOOR CINEMA
One of my favorite films of the festival has a bunch of forest creatures watching cinema instead of experiencing the same thing that is happening behind them. This is a film that says so much about modern life...and film going.

PAWO
A magical ski pole causes all sorts of trouble for a little girl and a blobby friend who keeps changing. Try not to smile at this one- I dare you.

RICEBALLS
One of the best films in the festival and maybe 2017. A father and son, both mourning the loss of the mother bond over lunches. By the time it ended I was crying.

SAUSAGE
One of the odder films has a sausage fall in love with a loaf of bread. Where this goes was unexpected and rather strange.

SPIDER WEB
Delightful film about a spider and a woman who knits. This is just a gorgeous film and an absolute delight.

SPRING JAM
Mating season and the male deer try to impress the does by using birds in their antlers to make pretty music...though one is having a bad time and ends up with...a record player... I thought this was going to be dumb and then it just went and went and turned out wonderfully.

STONE SOUP
Variation on the story of stone soup bringing a community together is a sweet little film.

UKA
Young girl in a black and white world finds a way to bring color to it. One of the best looking films in the festival. Stunning use of black and white and color to create something magical. 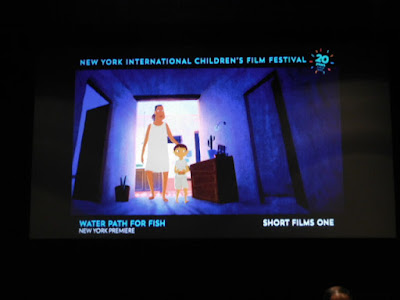 WATER PATH FOR A FISH
a boy finds a fish and decides to save it but has to find some water. Gorgeous film is a visual delight.

YOU LOOK SCARY
Crocodile with a toothache goes to a dentist who is afraid of being eaten. WOnderful exploration of how we can never know anything about another person and preconceived notions can be wrong. 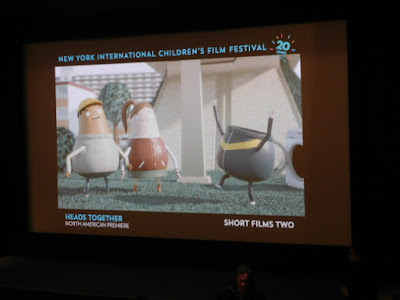 SHORT FILMS TWO
Solid collection of films has some really good ones
1MINUTE NATURE: JELLYFISH WEATHER
A minute long doc on the weather when jellyfish come close to shore.

HEADS TOGETHER
The story of three friends who find a magical washing machine that first makes their heads disappear  and the switches them causing all sorts of problems. Not bad.

MAST QALANDER
A young Sikh wants to be like the gangster rappers. One of the weakest films at the fest is very good until it stops. The film doesn't end it stops leaving us to ponder the next thing. I wanted to know where it went next- as did several people around me who I could hear mumbling "that's the end?"

NINO & FELIX
Two boys, one a brain and one a jock are forced to spend time together and find common ground. This one almost didn't work for me- I was okay with it until the end pulled it together and made me smile from ear to ear.

THE PITS
Impossible to fully explain without ruining it story of a half an avocado looking to find whats missing. Very good.

A SMALL ESCAPE
Wow and wow. Breezy tale that is pure magic about a pair of scissors looking to escape from an apartment. A wonder.

A WELL SPENT AFTERNOON
A father and son spend an afternoon together and vow not to tell mom what happened that day. Delightful time with good people. 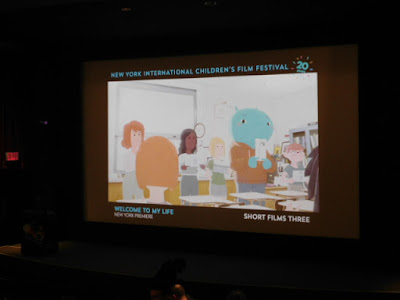 1MINUTE NATURE: MY CAT IN ME
Okay story about how ones dead cat can end up in you

CACOPHONY
Weakest of the bunch is basically the title over animated street sounds.

DOGTOR
Three dog friends who wanted to be more than pets meet for lunch to discuss life. 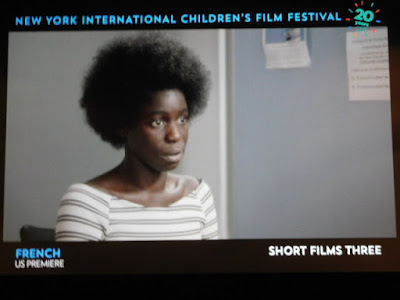 FRENCH
A young woman has to decide if she wants to apply for French citizenship or not. One of the best of the collection is beautifully acted. I could almost see this leading to a feature film.

IT WAS MINE
Based on a Paul Auster story this is an over long tale about the search for a book. Its a two minute story stretched out way too long.

THE LAW OF THE SEA
Animated documentary about the fishermen in Greece who now spend their time rescuing refugees. Its okay-certainly suffers in my eyes because of so many similar live action docs on the same subject.

ROGER
One of the best of the collection about a stop motion model in a James Bond like film who decides to fight back when he is replaced as the lead of a film. I just smiled from start to finish

TRIAL & ERROR
Utterly WTF story about a man trying to find a replacement button and coming up with stupid ideas as be babbles. It goes nowhere.

WE WILL DANCE, EVEN IF THE BAND NEVER SHOWS UP
Various rock stars dance. Meh

WELCOME TO MY LIFE
One of the few good films in the collection is about the life of a monster family in a human world. This is just really good...its so good you  believe its real,

WHEN I HEAR THE BIRDS SING
Animated doc about refugee children in Africa. Too short for what it is trying to do. 8 minutes for the stories  of five children is not enough time. It needs to be epanded. 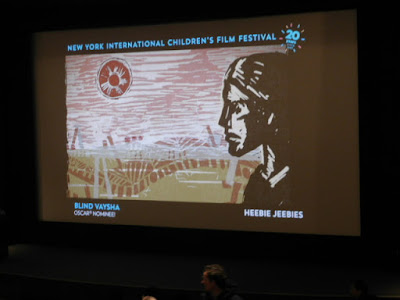 HEEBIE JEEBIES
Solid from start to finish collection of shorts. There are no bad films in the bunch. While none are best of the best, I would gladly watch the all over and over again.

BLIND VAYSHA
One of the best of the Oscar nominated animated Short films is about a girl who sees the future with one eye and the past with the other. I really like it-It plays like a Neil Gaiman story- except the ending doesn't work

BØYGEN
Experimental images of light and shadow. Something that must be seen big and loud and in a darkened theater. Wonderfully trippy.

CHATEAU DE SABLE
Sand soldiers defend a sandcastle from a giant crab. A homage to Ray Harryhausen is just wickedly cool. Even if the ending isn't perfect it's still a delight.

EINSTEIN-ROSEN
In the summer of 1982 a young boy tells his brother he has found the Einstein Rosen wormhole through space and time...the brother doesn't believe him,.. but he should. This was a sheer delight. a perfect short that is just really cool. The kids around me kept referencing this as the best short of the the collection and the festival, I need to show this to people.

GLOVE
Based on a true incident story about a lost glove that drifts off into space. delightfully philosophical it ponders what the glove might find as it drifts into the void.

RUBIK
Some one or something is altering the apartment and life of the family living in it. ANother visual stunner is small treat made better by the sterling animation. 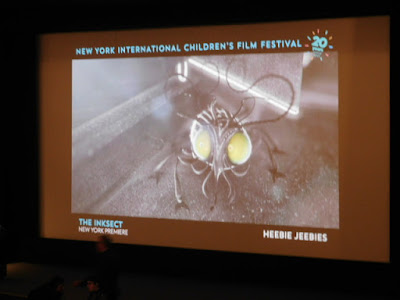 THE INKSECT
Wickedly cool story - similar to the best fantasy writers like Neil Gaiman or Grant Morrison about a future world where humans have become u thinking insects and books are banned because they have the power to transform. There is a really cool feature in this and I want to see it. 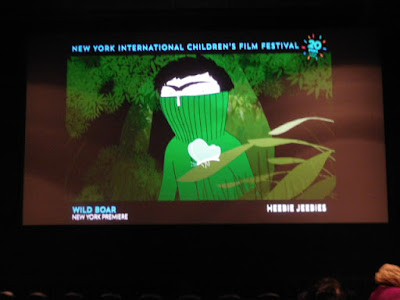 THE WILD BOAR
Probably the only truly scary film in this Heebie Jeebies collection has a feral young man running amok in a city before ending up in the wild. It works up to the end when it just sort of stops on a WTF moment. Its really good until the ending left me wanting.

VOLTAIRE
Wickedly cool story about a weathered weathervane rooster who is a bused by birds and life. When circumstance allows him to go to the big city he finds himself in a battle to the death with another weathervane on agran cathedral. Just a great story and piece of animation.  This has just gotten better in my head since I saw the film.
Posted by Steve Kopian at March 13, 2017