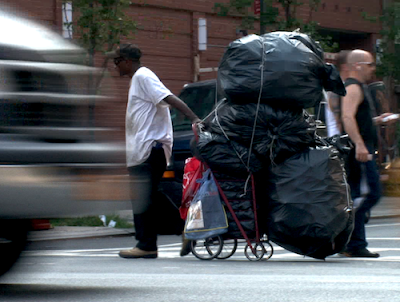 Canners is a documentary based in New York City about the people who collect cans to make money. Living in New York City I've seen these people my whole life, so it was interesting to get an inside look. The sad reality is that many of them are older- 60 and 70 years old, which was shocking to me! Working through the winter and summer, in all conditions. It's long hours, and little pay in the end. 100 cans to get just $5.00.

The people who are Canners have their own schedules, their own blocks they work on. Sometimes handyman from buildings help them out, but often times they're on their own. Some people work in teams, but most work on their own. Some are homeless, and some aren't, some have families, are married and have children, and some are on their own. Some are from New York, and some from other states, or other countries. One of the stories that was particularly heartfelt was about 2 men who suffered through Hurricane Katrina and lost everything and now are in New York City, getting some money from disability, but not enough to make ends meet. Actually many of the people in the film get money from disability, but not enough and so they have to work hard collecting cans to make a little bit more.

The people in the film, many are well spoken, seem smart and are hard workers, so I wondered while watching this, if many of them had tried to get actual jobs, it wasn't really touched upon. Though I think one man mentioned he liked working for himself.

Another thing I wished the film touched on are all the Asians who are Canners. They showed them in the film, and talked about them being the veterans, but none were interviewed and I wondered why.

I definitely recommend and enjoyed watching this documentary. It gives an inside look at a part of New York City we see often, but don't know the inside scope of it.