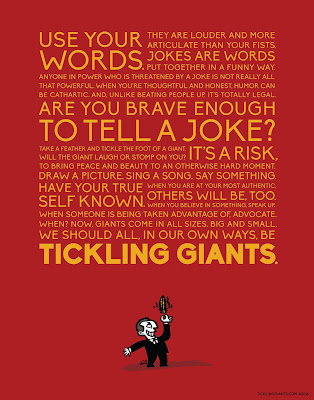 TICKLING GIANTS was one of the truly great films to come out of Tribeca last year. It is the story of Bassem Youssef who took his Daily Show like program to the top of the ratings in Egypt only to find himself  getting death threats and in danger of going to jail. The film was so good it made it on to my best of the year list for 2016. It was a film I talked up for the past year and which many people grew tired  of hearing me go on about. I couldn't wait for the film to be released because here was a film about what can happen if we don't fight for our freedom of speech.

And then something really weird happened- Donald Trump actually became President and started to attack the press and anyone who dared challenge his world view. Trump's insanity was right out of a movie or a  dictatorial nation far away from America. Suddenly the story of  Bassem Youssef was in danger of playing out all over again as Trump locked horns with Saturday Night Live. The joke was on us and suddenly it looked like we might not be able to speak freely. Suddenly TICKLING GIANTS wasn't  so out there any more- to the extent that I had several people ask me "what was that film you couldn't shut up about called?"

Now at last the film is coming to theaters. Here at last you can see for yourself a story that isn't so far out any more and really does have a connection to us here in America.

What follows is my review from Tribeca. I could have changed it but this is what I wrote when I saw it  the first time when the passion for the film was flowing. I don't think I could really improve on it - only add to it- which I've done in this intro and a brief coda.

Please do yourself and the world a favor and see this film. Say what you will about the film itself it's message about the importance of speaking up must be heard- now more than ever.

For me the idea of free speech is an important thing. Being able to tell our leaders to eat shit and die is vital to a free society. Its why seeing people such as Donald Trump calling on his followers to silence the opposition is terrifying. The world has become stupidly reflexive to the point that no one can take a joke. Everyone takes offense at everything. People have forgotten that while we have many rights, we do not have a right not to be offended. If we aren't allowed to make fun of things, and of offending those in power then we have lost a basic human right. Being able to do so helps prevent the authoritarian bond because it brings the demagogue and tyrants down to earth.

Charting the run of Youssef's show from internet hit to TV hit to political target with death threats TICKLING GIANTS shows us very clearly what could happen if we lose the right to speak up. A wonderful brother to CAN WE TAKE A JOKE? which looked at humor and censorship, GIANTS reveals what will happen when censorship comes knocking, fear and death. This is not abstract ideas or people arguing in the streets, this is people with bombs and guns trying to silence the opposition. Its terrifying. It is this real world practicality that lifts the film over some other similar docs.

This is one of the best films of 2016 and and an absolute must see. You must see what a the lessening of free speech will bring.

TICKLING GIANTS starts at NYC's IFC  Center Wednesday.  It will play around the country starting March 21. The film will open in in LA on April 7.

Tuesday March 14th TICKLING GIANTS will screen at the IFC Center in New York as part of the Stranger Than Fiction series. Director Sara Taksler will be in attendance and taking part in a post film Q&A

Bassem Youssef' book  REVOLUTION FOR DUMMIES: LAUGHING THROUGH THE ARAB SPRING is released on March 21.  Mr Youssef will be appearing at NYC's Town Hall on the same night for a speaking engagement and reading. (for more information go here)

Do yourself a favor see the film, read the book, engage and never back down from anything you have to say contrary to what our leaders say.