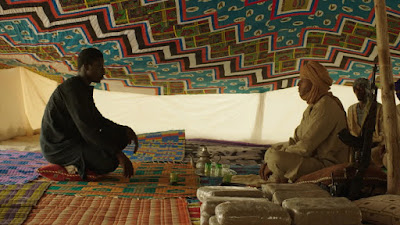 One of the very best films of New Directors New Films and in the running for a place on the best of the year lists WULU is a frightening roller coaster ride through the drug trade in Mali. Its a film that will leave you limp by its conclusion.

A van driver is tired of his dead end job. Five years on he is fast tracking to nowhere. When he is passed over once more he contacts a friend in the drug trade and asks for a job.Soon he is running drugs, rising up the ladder and dodging bullets.

The first feature from Daouda Coulibaly is certain to bring offers from Hollywood and the rest of the world. Looking like a bug hollywood film the film carries the weight and the lived in quality of real life certainly Coulibaly or someone connected to the film understands about real life with the violence taking on a frightening realness that Hollywood simply never manages. Coulibaly staging of his set pieces are going to be copied by the next generation of filmmakers across the globe for their simplicity and impact.

I've read how some writers have compared it to various crime films including SCARFACE and while that maybe true on some levels WULU is most assuredly it's own thing.Frankly I haven't been this bowled over by a crime film sin GANGS OF WASSEYPUR. WHile the two films are completely different in their approaches, scope and story telling, both film get under your skin and make you realize you've seen something special.

I don't want to say too much or over sell the film. I also don't want you to know where it goes. I say this because something I read before I saw the film had me waiting for one thing to happen. When it did, much earlier than I thought I thin found I enjoyed the film more because I didn't know where it was going. To that end I'm just going to say buy a ticket and take the ride.

One of the best films at NDNFs and highly recommended.

For tickets and more information go here
Posted by Steve Kopian at March 14, 2017