HyperNormalisation (2016) INTO THE ZONE: A WEEKEND WITH ADAM CURTIS 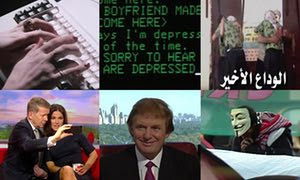 Adam Curtis's latest film is another mind warp trip through history, politics and popular thought. Running almost three hours and screened as a single film it is a film that is going to leave viewers absolutely spent.

Beginning with the dual events of the failure of New York City to be able to float bonds in 1975 which effectively gave rise to Donald Trump and Henry Kissinger's attempt to keep the Middle East factional the film looks to explain how we got to now and why. Curtis is arguing that the whole world now is mirroring the old Soviet Union which knew it wasn't working a long time before it collapsed but which motored on simply because it was easier to do so then confront the complexities of the real world. Curtis feels that our inability to deal with the complexity of life is what is driving a world where strange things happen.

Brilliant linking up of history- Curtis is giving us a damning look at our world today. We've gotten here because we and our leaders refused to deal with anything correctly.Wrong villains were blamed (Libya instead of Syria), lies and cover stories we knew were false were spouted back as truth and we strove to stop anyone who tried to speak the truth. No one today seems to know history as well as Curtis  and he's willing to smash cherished lies in the hope of waking us up.

HYPER... is a long dense film. It maybe his most complex film to date and watching it took me longer than its two hour and forty odd minute run time simply because I had to keep stopping the film to take a break and digest what I was seeing. I was overloaded early and it just got worse.  I have pages of notes but I'll need another viewing or two to make sure I got it all right.

Frankly I don't know how anyone will react when the film runs this weekend in LA at Cinefamily's Adam Curtis weekend (Tickets here). I expect the post screening Q&A will involve many tongue tied people. As for me I have a great deal to think about and consider.