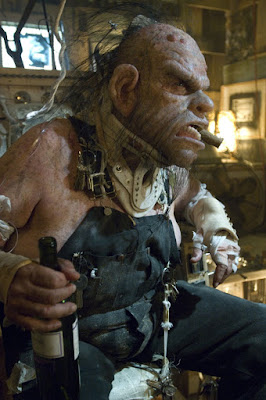 Visual effect master Gabriel Bartalos' second stab at directing a feature film is a one of a kind film. It is most definitely a unique viewing experience. Destined for a cult following this is exactly the sort of film that had it been released in the mid-1970's would have attained classic midnight movie status.

Nominally the story of Bernard, a white tux clad conductor on the run from himself, the film is a decent into insanity as Bernard and the people around him have strange things happen to them and occasionally mutate into weird beings. What it means and what is really happening is anyone's guess.

With an IMDB date of 2013, which is the date the Boston Underground press material claims was when it first hit the festival circuit, the print I saw had a copyright date of 2015. It now seems to be heading for release this year in 2017. In any year this is one messed up film.

Written directed and produced by Bartalos this is a singular vision. A wild walk on the truly brain damaged side this is a film that is best viewed at midnight ith an audience. A giant WTF!?! SAINT BERNARD is the sort of film that will never play during normal hours because a typical paying audience will flee for the exits. There is a reason why the Boston Underground FIlm Festival is running it at night- that's when a crowd most likely to be on its wavelength is going to be out and about. Its the same reason PINK FLAMINGOS and ERASERHEAD played for decades at midnight and rarely at any other time.

Personally I have no idea what in the hell this film is all about. I equally have no frigging clue if I like the film. That said I am truly glad that I saw it. It is rare that we get a chance to see a one of a kind vision- something so unique that words don't do it justice. That may sound like a backhanded compliment but it's not. I truly appreciate SAINT BERNARD as an antidote to 99.99% of other films.  This is a film that woke me back up cinematically and made me realize the wonders that are out there.

To be completely honest I don't know if the vast majority of people are going to like the film. The film is too weird, too strange too unique to find mas acceptance however I know that pretty much everyone who sees the film will know they saw something. Trust me, you can't see SAINT BERNARD and not have a reaction to it- not only a reaction but a burning desire to discuss it. Films should provoke a reaction and SAINT BERNARD does that in spades.

A must see for the truly adventurous- SAINT BERNARD plays Boston Underground at midnight tonight.
Posted by Steve Kopian at March 25, 2017