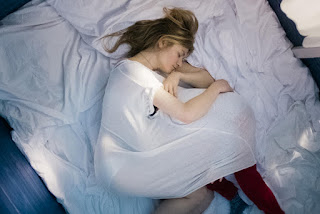 Six months into her pregnancy well known comedian Astrid discovers that the baby she is carrying will most likely have severe handicaps. Her world rocked by the news she is forced to consider whether to keep the baby or go through with a late term abortion.

Belt yourself in it’s going to be a bumpy night as 24 Weeks brings home the questions surrounding abortion in ways most people have never considered. A heart breaking and heart rending film that raises all sorts of issues concerning what is best for the child and the family the film allows them to play out in effecting ways. I did not expect this to go as it did, nor did I expect this move me as much as it did. My first thought when the film ended was “whoa”. Not deep and meaningful but deeply heartfelt.

Forgive me I would love to discuss this film but to be honest this is one you need to experience for yourself. Anything I have to say ultimately isn’t going to matter. This is a film you need to see and discuss with other people who have just seen it. This is one of those films where I want to be in the room when the discussions happen. I can only imagine where any post screening Q&As are going to go or alternately what the discussions in the lobby are going to be like after.

This film will kick you to the curb and make you feel and think- a lot.

While not perfect, the film bends very close to be being polemic but the film seems to shy away from it because the characters and the emotion they convey keep the film away from being too intellectual. Ultimately this is a film that you feel.

Recommended. One of the most recommended films at KINO.
Posted by Steve Kopian at March 27, 2017