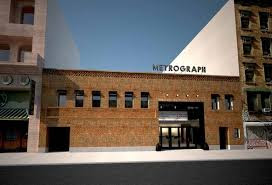 On the heels of the release of his new film Personal Shopper, Olivier Assayas will appear in-person to present Clean and Demonlover. The third film in his "International Trilogy," Boarding Gate, will also screen. Assayas will be joined by actress Greta Gerwig for a Q&A following Clean, and he will introduce Demonlover. Special thanks to UniFrance and Air France. \
----
March 11 Madeline Anderson: Three Films

Documentary titan Madeline Anderson will appear in-person presenting three films: Integration Report 1, A Tribute to Malcolm X, and I Am Somebody. The program will repeat on March 12, without Anderson appearing in-person.
----
March 14-15 agnés b.: Rebellion, Resistance, Fun

Fashion designer, producer, and filmmaker agnés b. will present five films: The Asphalt Jungle, The Pope of Greenwich Village, It's a Gift, Z, and Women in Love on March 14 and 15. She will appear in-person at The Asphalt Jungle.
----
March 17 Caveh Zahedi Presents The Show About the Show

The great Kelly Reichardt will appear in-person March 18 to introduce and participate in Q&As for two of her best films: Meek's Cutoff and Certain Women.
----
March 21 Memory Short Film Program with Filmmakers In-Person

"Memory Short Film Program" is an exclusive collection of short films by award-winning and emerging filmmakers. This one night only event consists of a mix of premieres and recent favorites from, among others, the New York Film Festival, SXSW and AFI Docs. Filmmakers Zia Anger, John Wilson, Sam Kuhn, Romain Gavras, Sophie Savidies, and more will appear in-person.
----
March 29 Terence Davies Presents The Long Day Closes and Tammy and the Bachelor

Rock-n-roll's greatest living photographer Mick Rock will appear opening weekend for SHOT! The Psycho-Spiritual Mantra of Rock, along will filmmaker Barbaby Clay. Showtimes/details to be announced soon.
----
April 8-9 Joan Tewkesbury Presents Nashville and Thieves Like Us

Joan Tewkesbury penned two of Robert Altman's peak accomplishments, Nashville and Thieves Like Us, and will appear in-person presenting both on April 8 and 9.
----
April 11 Letterman: The Last Giant of Late Night with Jason Zinoman

Writer Jason Zinoman curated a series of films starring David Letterman, timed to the release of his biography Letterman: The Last Giant of Late Night. Titles include Man on the Moon, Private Parts, Cabin Boy, and Beavis and Butthead Do America. A book signing follows the screening of Cabin Boy on April 11.
----
April 12 James Gray Presents The Lost City of Z in 35mm

Contemporary classicist James Gray will appear in-person on April 12 to present a special 35mm screening of his latest film The Lost City of Z. From the 12th to 15th of April, all of Gray's films will screen, which include Little Odessa, The Yards, We Own the Night, Two Lovers, and The Immigrant.
-----
April 13 Too Much and Not the Mood with Durga Chew-Bose

Timed to her inspired and visionary collection of essays, Too Much and Not the Mood, Durga Chew-Bose will appear in-person for Wanda on April 13 and Jeanne Dielman on April 15. A book signing will follow Wanda.
----
April 14 My Entire High School Sinking Into the Sea with Dash Shaw and more!

On the occasion of the publication of Paul Auster's new book 4 3 2 1, Auster presents three Laurel and Hardy two-reelers featured prominently in the book: The Music Box, Helpmates, and Busy Bodies.

For more information on these and other screenings go to the Metrograph website.
Posted by Steve Kopian at March 03, 2017