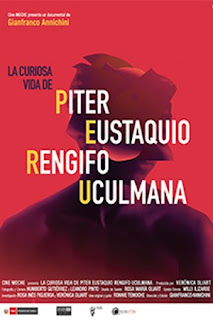 Puzzle box of a biography is told out of order by various people of a man whose initials spell out Peru.

Okay, this film has me vexed. Very much about something and very much compelling I honestly have no idea what this film is about. The story of a rogue and his adventures is certainly one that is interesting but the fact that it's all jumbled about makes it hard to know what.

Is this really about the man or the country? I'm not too sure..

Watching the film I found that I was both drawn in by the various stories and pushed aside. The stories themselves are compelling but for me everything never really hooked up. I was riveted and fascinated but at the same time the film was making me work so hard at trying to sus it all out my head hurt.

I like the film I just have no idea why or whats the the point.

Definitely worth a look for anyone who likes to work with their films.