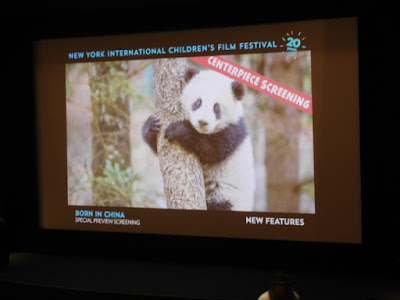 Today was a feature and a collection of shorts with lunch with Joe Bendel in between.

First up was a preview screening of Disney Nature's BORN IN CHINA about wild life in China- specifically some deer, monkeys, pandas, snow leopards and cranes. Its your typical create a story around the animal footage we have- so characters are created and a year in the life story is told.

Beautiful to look at with photography so perfect it looks like a window this is a very good doc for families. The kids were laughing and reacting in all the right places.

However be warned that while not too deep, the film doesn't shy away from darkness with one of the stories ending really badly. The circle of life is then turned into a Buddhist rebirth saga and everyone goes out into the lobby feeling good.

My only complaint with the film is that this could have been three or four individual feature films since the film is only 79 minutes meaning that each story only gets about 15 minutes of screen time- if that.

After the film I went with Joe to have lunch before I returned to SVA for SHORTS 3. While I will be reviewing all the films individually in a large post of all the shorts, I do want to say that as collections go this is just okay. There are only two shorts that rise above being just okay- WELCOME TO MY LIFE about a monster family living among humans and ROGER about a stop motion puppet who wants back in the lime light.

I think the best explanation for how the collection is would be to say that this is the first collection in 20 years that didn't get some sort of applause after every film.

Look for a report on all the short collections late tomorrow when I get back from seeing 4 collections of shorts
Posted by Steve Kopian at March 11, 2017