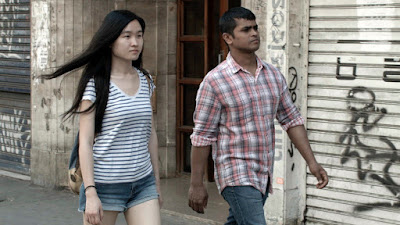 Xiaobin, a girl moves from China to Argentina in order to join her family. SHe doesn't speak a word of Spanish. As she learns the language her life and perceptions change.

Odd hour long film is not going to be fore most audiences. The intentionally stilted dialog creates an odd head space which many people are not going to want to enter. On the other hand it is perfect reflection of how we react when learning a new language. We don't instantly get all of the nuances and meanings- things which can get even more muddied when you are with people who also don't speak the language well either.

To be honest I'm not a huge fan of the film as such. I didn't care about the characters and the actions they take through the film. However as an intellectual examination of how language shapes are perceptions I was in heaven. Here is a film that is a kind of perfect companion to THE ARRIVAL and how learning the alien's language literally changes how we see the world. This is more real less intellectual variation on the same plot. As we see Xiaobin learn more and more we see how her world changes.

Recommended for those who want a film purely for the head.

For tickets and more information go here
Posted by Steve Kopian at March 17, 2017