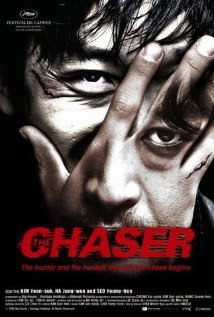 A film that changed the Korean film industry when it came out to the point that every film seems to be compared to it.

The plot of the film has a dirty cop turned pimp, trying to figure out where all his girls have gone. He thinks they have run away or were sold to someone else. The reality of the film is much worse, they have all gone out with the same guy and he's a serial killer...and our hero has just sent the last of his girls into his clutches.

Brutal violent and darkly funny this is a film that opened the door for a good number of similar films (I don't know if we would have gotten I Saw the Devil with out it.). It's a modern classic of a sort. It's also the kind of film that really should be seen on a big screen with it's rich compositions and frenetic style crying out to be seen on a big screen (Yea I know you may have seen this on DVD but you haven't experienced it until you see it on the big screen)
Posted by Steve Kopian at March 19, 2017