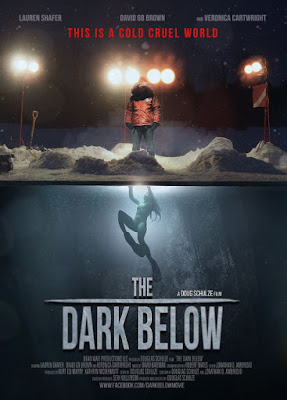 DARK BELOW  tells the story of a woman who is beaten and drugged by her dive instructor husband (I think that's who he is) and then dumped under a frozen lake in such away as to make it look like an accident happened and has to fight to stay alive as he struggles to keep her under water.

Presentation is everything and the presentation here is either going to thrill you or make you throw things at the screen. Told with out words and seemingly in endless slow motion DARK BELOW is an extreme example of form over content. We are suppose to groove on the visuals and music but the trouble is the slow motion destroys the emotion of the performances. it hard to connect with anyone when the film feels slightly more than a version of perfume commercial. Fifteen minutes in I was hoping for some thing more but it just wasn't there.

Normally the lack of words can work to a films advantage but here the lack of connecting details keeps us distant. Yes we know the basic story, but what this woman and this guy were connected never really made sense. I kept having the feeling that I was missing something. (To be honest it's entirely possible I did miss something since after 15 minutes I started not to wholeheartedly look at the screen.)

This is one of those films where I probably should have looked at the press noted but to me that's cheating since most people don't get those. (It probably wouldn't have answered my questions like why her face didn't freeze after hours in the water)

With a listed  running time of 75 minutes the film is actually closer to 60 if you remove the end credits. I mention this because even at that brief running time the film feels overlong. To me it feels like this should have been a short but that they decided to expand it by using slow motion.

Not a bad movie as such, it's more a movie that is going to play best if you click with it...