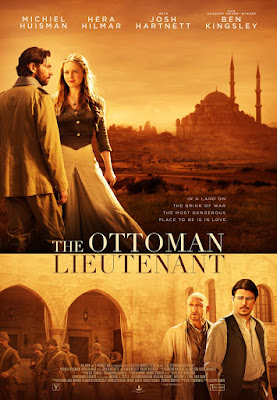 THE OTTOMAN LIEUTENANT is the story of a strong willed young woman who earns her living as a nurse. Tired of the social injustices of 1914 Philadelphia she decides to volunteer in a clinic in Turkey. Once there she falls in love with the titled character, however their timing is bad and the world stands on the brink of the First World War.

Beautiful to look at historical romance is a nice way to pass an evening. Better than many other similar film films THE OTTOMAN LIEUTENANT is largely good time with good characters. Set in a part of the world that most people don't know about and set at a time that is beginning to fade from memory the film has the advantage of having a sense of the exotic about it. While the basic romance is something we've seen before the trappings it is wrapped in are new enough to make the film worth seeing.

I really like the film a great deal. For me it played out as a nice change of pace especially after so many serious films I've been watching of late.

If I have any reservations about the film it would simply be that the film isn't quite dirty enough, things are too neat and the film never fully shakes off the sense of dress up (This would be right at home next to any number of direct to cable films) . That said the film always remains entertaining and is most definitely worth a look when the film opens Friday
Posted by Steve Kopian at March 07, 2017