Los Angeles' The Cinefamily presents INTO THE ZONE: A WEEKEND WITH ADAM CURTIS (March 17th - 19th, 2017) a rare and singular weekend with internationally acclaimed and BAFTA award-winning political documentarian and journalist Adam Curtis. 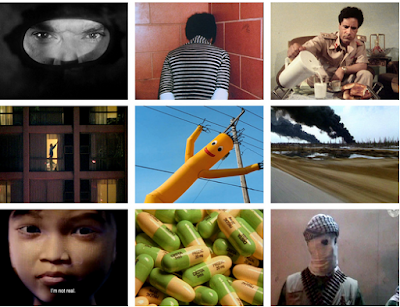 If you've been a long time reader of Unseen Films you know we are HUGE fans of Adam Curtis so we are thrilled that his his newest work HYPERNORMALISATION is being screened in Los Angeles in about two weeks with the man himself in attendance.

If you don't know Curtis's work you should. A brilliant documentarian/essayist he has a brilliant way of seeing the world and putting everything- and I do mean everything all together.  He will expand your mind and change how you see the universe and yourself.

I wish I could go but I'm stuck in New York.  Below is a the press release on the series which is the new film, films related to it and talks by Curtis

If you are anywhere near Los Angeles go.

Mr. Curtis will present the U.S. theatrical premiere screening of his acclaimed 2016 BBC documentary HyperNormalisation, a prescient work about how politicians and other power brokers construct new, slippery realities. He will also host and curate a weekend of films that explore the themes laid out in the film.

Additional highlights of the weekend include a "Show & Tell" evening talk with Curtis, and a very special Q&A with Curtis moderated by Mad Men creator Matthew Weiner (who cites Curtis' iconic film The Century of the Self as a key influence on Mad Men).

All screenings will take place in Los Angeles at The Cinefamily, located at 611 N. Fairfax Avenue, Los Angeles, CA 90036.

INTO THE ZONE: A WEEKEND WITH ADAM CURTIS - Schedule:

Statement from Adam Curtis on his work and HyperNormalisation
"Those in power in society - the politicians, the journalists, the experts - maintain their power by telling us stories about the world. Those stories tell us what is true and what is false, what is right and wrong, and what is real - and what is illusion. But there come times when these stories begin to break down. And people start to distrust those in power - and their definition of what is real and what is fake. At that point you enter the Zone. The film HyperNormalisation tells the story of how we got to this place. It is also about the new systems of power that we cannot see - because we are trapped inside the Zone."

About Adam Curtis
Adam Curtis is an award-winning widely influential documentary filmmaker and journalist. He works for BBC television in London. His acclaimed films include The Century of the Self (2002), The Power of Nightmares (2004), All Watched Over by Machines of Loving Grace (2011), Bitter Lake (2015) - and most recently HyperNormalisation (2016). His films go back into the recent past to tell dramatic stories that lead the viewer to look again at the present day - and help them make sense of it. They try to show how power really flows in today's complex society, not just through politics - but through science, public relations and advertising, psychology, computer networks and finance. Curtis has also done live shows with the immersive theatre group Punchdrunk and the band Massive Attack. His films have been shown at the Cannes film festival and have won awards - including 6 BAFTAs.

About The Cinefamily
THE CINEFAMILY is a Los Angeles nonprofit organization of movie lovers devoted to finding and presenting interesting and unusual programs of exceptional, distinctive, weird and wonderful films. The Cinefamily's mission is to reinvigorate film culture by fostering a spirit of community and a sense of discovery. We believe that movies work best as social experiences: they are more meaningful, funnier and scarier when shared with others.

The Cinefamily was founded in 2007 by brothers Dan and Sammy Harkham and Hadrian Belove, founder of Cinefile Video. The Cinefamily currently averages 14 shows per week, many of which are enhanced with special guests, live music, dance parties, potlucks, and other kinds of social fun. Over 65,000 patrons visit the Cinefamily annually. Please visit cinefamily.org for more information.
Posted by Steve Kopian at March 03, 2017