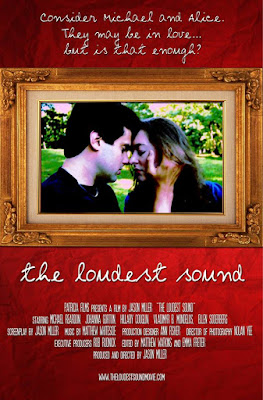 THE LOUDEST SOUND poses a problem to me. The film is a small budgeted feature film that doesn’t take the road well-traveled or give easy answers to the questions it raises. It’s a film that really needs to be seen by lovers of good films and by those wanting to latch on to someone who may very well be heading for big things in the future. In THE LOUDEST SOUND a great story is being told and I realized this when I spent 20 minutes in the Times Square subway station regaling Hubert Vigilla about why the film matters and why people should see it. I was so lost in talking about it I almost missed my connecting train home.

The trouble is that like most small budgeted films the film there are bumps. That doesn’t mean the film is bad, it simply means that you have to forgive it’s bumps. Some people don’t like bumps and unless a film is nigh perfect on the surface they don’t want to see it or will dismiss it. They are willing to pass up a treasure because it’s not glossy.

It's films like these that most film fans will occasionally pick up along the way and champion and fight to get noticed. No the films aren't technically perfect, but there is something there, at the core that reveals a greater truth and perhaps a the working of an undiscovered next big thing or great director. When we set out to champion a film like THE LOUDEST SOUND we know they aren't perfect but we also know that they are closer to being great than most glassy perfect films coming out of the big studios.

THE LOUDEST SOUND is a film that I'm kind of fighting for. Its a rough and raw and scruffy and there is something about it that made me almost miss a train as I babbled to a friend in a crowded subway station.

What follows is  the review I wrote after seeing the film.


THE LOUDEST SOUND can be a punch in the face. If you’ve had an addict in your life this film will probably rattle your cage in some way.

Michael and Alice are a couple in danger. Alice has substance abuse problem and periodically will disappear for days at a time. As the film opens the she’s just returned from four days off the grid. Michael stoically watches as Alice begs and pleads for understanding. The next morning he runs into Alice‘s dad who has decided that he’s going to send his daughter down to Tampa for rehab. Left to his own devices Michael replays his time with Alice and ponders what he really wants. Something that becomes less clear when he begins interacting with a pretty neighbor

Jason Miller has made a film that frequently reveals intense raw power. Watching the first half hour of the film I was kind of knocked back on my heels as the scenes played out in painful long takes that seemed to be less a fiction film and more a home video. Watching the scenes I watched as moments from my life play out again, sometimes dealing with a friend with addiction and sometimes the painful emotional collision between lovers. There were times watching the film I hurt, not just emotionally but tactilely. Miller gets a great deal right.

Miller’s script makes a ballsy choice in in that we don’t necessarily always like many of the characters. We see the flaws of Alice, Michael and the other characters and we see how they hurt each other. It’s a move that depends our understanding of the characters and makes the film some more than standard issue. It’s move that is going to bother some audience members who need wholly likable characters, especially at the center of a film. For the rest of us its food for thought.

As much as I like and recommend the film I do have to point out two small areas where the film wobbles.

The first is that the film can be a little jagged technically. The sound in one or two scenes appears isn’t perfect, the result of live recording. There are a one or two other technical clichés. None of it is fatal, indeed the less polished nature makes the film more real. The simple camera set ups give the proceedings a voyeuristic film. For most of the film we feel that the events are being recorded and not acted. I mention this because I know some people will not watch films that aren’t perfect. Everyone has their own issues with film, but not letting a film stand or fall on its own will only result in missing small gems like THE LOUDEST SOUND. You have to go with the film and let the story work its magic. If you can’t give a film time to transcend its physical limitations in a couple of places you probably shouldn’t be watching films.

The other wobble is the one real problem with the film and that is that some of the acting is uneven. The largest offender is Michael Reardon who plays Michael. There are scenes where he is really good and some where he doesn’t seem to be there. When he isn’t there it lessens the film a bit.

In his defense the role of Michael isn’t an easy one. It’s a role where a lot of what the character is is in what is unspoken. A lot of what is going on is what is happening behind his eyes. In the early scenes where Alice is breaking down in front of him and he is uncertain how to react, as we find out he isn't doing nothing he's pondering what to do go or stay. At other times he’s struggling to deal with how he feels about his world and the people in it. He is a man considering things and while sometimes we connect, sometimes we don’t. There is a complexity to the role that sometimes overwhelms him in the performance as in life.

But it’s that complexity that is where THE LOUDEST SOUND soars. Rarely have I run across an American drama, especially an original small budgeted one that is ballsy enough to dare to try to do more than your typical plot progression. Most filmmakers try to make a film that is going to be safe and get them noticed. People play to the peanut gallery- they won’t rock the boat for fear of getting instantly turned down. That is not the case here, THE LOUDEST SOUND is going for largely uncharted territory and we are better for it.

Ultimately you have to forget any flaws and consider what Jason Miller is doing, he is giving us a film that plays out in atypical ways. Normally we’d probably have followed Alice as she goes off but that’s not where we go. Normally we’d have characters never doubt their love of the addict or if they question it fleetingly. Here Michael rethinks everything. Normally scenes play out in simple bite size pieces- Miller doesn’t do that, he lets scenes run on and on. The words are awkward and pained. Nothing is polished, people fumble with what to say. Conversations are not always on point. It’s a brilliant move because not only does it give us additional clues about the connections between the characters but it gives us a real sense of life lived. In real life conversations, especially deeply emotional ones are not always on point.

As I said above watching some of the exchanges I felt my life replaying- pained moments were relived. Its so close to reality that I had to email Miller to ask him if the film was based on his life (it isn’t)

THE LOUDEST SOUND is a film to track down and Jason Miller is a director to keep an eye on.
Posted by Steve Kopian at March 08, 2017