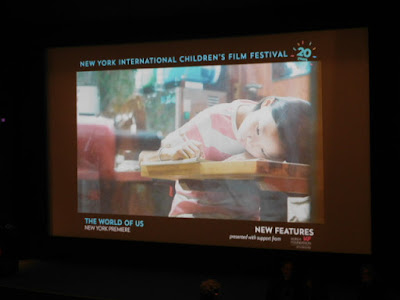 One has to praise The New York International Children's Film Festival for programming THE WORLD OF US for kids. The film is a warts and... warts... look at the life of a school girl who is an outsider. Its a film that rocked the adults in the audience and had Joe Bendel and myself just looking at each other and not wanting to go there.

Sun is a sweet little girl who is the outcast of her class. Constantly picked on and chosen last for everything. She is abused at every turn by anyone her own age. During summer break she meets and becomes friends with Jia, the new girl in town. The girls bond but when school starts up Jia moves away from Sun for the cool girls, the leader of which was also once Sun's friend until she too turned.

For anyone who was an outsider this is going to be a painful reminder of the slings and arrows suffered growing up.  This film hurt because it gets it all dead on right. This is the way it feels growing up  and how it feels when friends turn unexpectedly. I was watching pieces of my life play over again  and I was shifting uncomfortably in my seat. Suddenly I was 7 or 8 again.

To be honest the picking on Sun isn't constant, but it's close, and it feels like it. I freely admit that I was much more sensitive to it since there is a tendency in many Korean films to have characters belittle and abuse each other. I don't like it in action movies and thrillers and I surely don't like it when kids do it to each other especially when I know it's what many kids do.

Credit director Ga-eun Yoon with making a film that doesn't sugar coat it. The girls in this film are terrible as often girls of that age can be in packs. The lives of both Sun and Jia are not happy, their home lives are a mess and we see it all. To be certain their parents care but at the same time they can't be there all the time and Sun is left to figure it out herself.

In trying to discuss the film afterward with JB we both were thrilled that NYICFF showed the film because perhaps it will teach some kids some empathy for what it's like when you are picked on. We also liked that New York audiences were getting a chance to see it since the film seems destined to fall between the cracks, it maybe too intense for kids and distributors may not touch it because they think it won't play well for adults since it has children in the lead- but it will,

I do want to take exception to the festival reading of the end of the film. While not dire I'm not so certain that the ending is as hopeful as they would want to make out. I think it can be taken several different ways.

Uncomfortableness aside. I do think this is a great film on every level and for those who want to see a perfect reflection of life I highly recommend the film.

THE WORLD OF US plays again March 12. For tickets and more details go here. 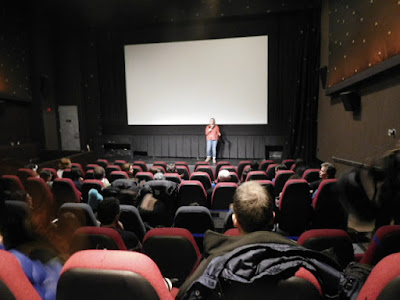