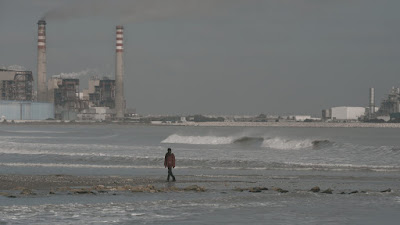 Two men make their way across a desert when they are set upon while traveling in the back of a truck one escapes eventually reaching a forest.

Mystical refugee story has no dialog is a tough nut to crack. I'm not sure if taken on it's own terms that it means much of anything. The director, in the copious press notes goes into great detail about the meaning of the film including explaining the characters, locations and actions. However since none of it is in the film, nor are the press notes likely to be read by the vast majority of the audience they should be discounted. Additionally the notes only make clear how little the director actually gets across.

As a film on it's own terms  THE LAST OF US is an okay puzzle box of a film for people who like puzzle boxes. I don't think that it adds up to anything other than pretty pictures that form a rambling story that kind of goes nowhere.  Clearly this isn't a film for me  but rather one for people who want a blank canvas they can discuss with friends and insist they are right since odds are there is enough vagueness that anything is possible.

If you are going to see this film see it big since the images are amazing- however just be prepare to wrestle with the pretentious emptiness.

For more information and tickets go here
Posted by Steve Kopian at March 23, 2017