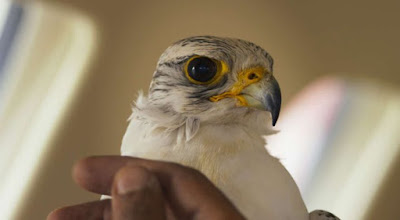 A documentary on the rich falconers from Qatar who are keeping the sport alive.

I am not going to get into any discussion of how the rich sheikhs are single handedly wiping out the falcon populations of the world via a grossly under reported smuggling operation that is the third most lucrative in the world (see FEATHERED COCAINE) simply because that is not a focus of the film. Instead I will simply talk about the film itself.

Beautiful wide screen images reveal a world where money is no object. Motorcycles can be made of gold, you can race you super expensive sports car across the desert with a cheetah as a co-pilot and you can buy up falcons so you can go out into the desert and hunt.  This is a great looking film that really must be seen on a big screen. As a collection of pretty pictures of crazy rich people this is a must see...

...as anything else this film kind of bores after a while. Running only 70 minutes I was kind of done after about fifteen since there was nothing for me to really hang my hat on. Yes these people have more money than is probably good for their sanity, but I really didn't know why I should care. My over riding thought was "you are showing me this because...?"

Yes it's lovely but honestly other than seeing pretty pictures there doesn't seem to be much here...and even if that is the point I don't need to pay to see it. 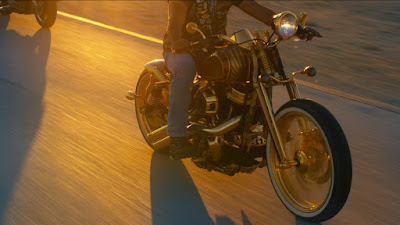