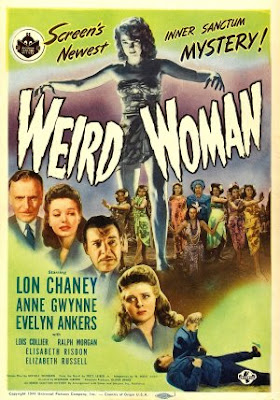 Second of the Universal Inner Sanctum mysteries has Lon Chaney as a college professor who goes off on an expedition and falling in love with an American girl raised by the locals. Taking her back to his home he finds he has run up on the wrong side of the woman who he was supposed to marry. Angry that his bride is still taking part in native superstition he destroys her magic items thus seemingly turning his good fortune to bad as the woman scorned makes moves to destroy him.

Unexpectedly complex film is not the sort of story one finds in a program thriller. Here we have the battle between superstition and reason thrust firmly into the light of the day. Its a battle of the sort one would expect to come under fie by the church since it's rational humanism is one that runs counter to church teachings.

The film is also a damning look at small town and academic pettiness and small mindedness. All of the carnage that occurs is the result of rumors and lies being used to evil purpose. While the film speaks volumes about the era the film was made it speaks just as much to the behavior the internet spawns as people post things on face book and elsewhere hoping to provoke reactions so that their evil ends can be served.

This is a solid little film that surprisingly doesn't really have Chaney's character always front and center. For probably half the film Chaney doesn't appear, we're watching as various characters interact. The interesting thing is that while Chaney is not physically on screen during the whole film his presence is always felt. Say what you will about his talent Chaney was a personality and he had a real weight  to the point that when he needed he could be someone just by walking on screen- or leave a vacuum by walking off.

I like this film a great deal. I like that it's not a conventional mystery but more a thriller.