Stick a fork in the 20th Anniversary of the New York International Children Film Festival.- it's done and it has rocked the pillars of heaven. From opening film REVOLTING RHYMES all the way to the closer ANCIEN AND THE MAGIC TABLET the fest served up an incredible selection of features and shorts for people of every age. More to the point this year's fest was one of the best.

Personally I had a blast.  And as I said to JB right before ANCIEN began I can't believe we're done for the year. Now to slip into withdrawal until next year.

Thank you to everyone connected to the festival- I love you all.

As the festival last day dawned I planned to go from beginning to the end. 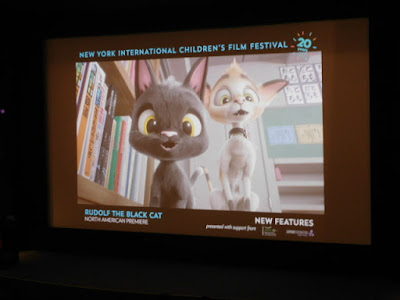 First up was RUDOLF THE BLACK CAT

Based on a bestselling and well loved Japanese novel, the film tells the story of Rudolf, a black cat, who decides to follow his owner out of the house and into the street. When he is chased by a fish monger into the back of a truck he ends up lost in Tokyo. Meeting a cat called Gottalot (because he has a lot of names) he learns to survive on the street and the importance of the families we make.

A good little film, I love how this film doesn't follow the typical track. There are several plot twists that I didn't expect (I've been watching unimaginative American animation).  This is a film I can't wait to show my six year old niece. 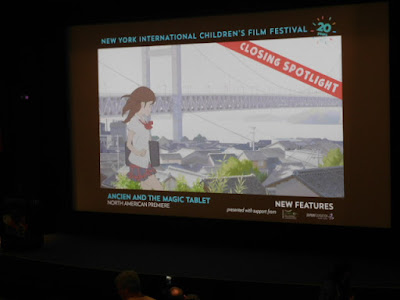 The second film of the day was Kenji Kamiyama ANCIEN AND THE MAGIC TABLET. If you haven't heard of it before, don't worry you will. The film only opened the night before in Japan and a out side of the premiere screening only the screenings here in New York have happened so word is just getting out.

The film concerns Kokone a teenaged girl who is just about to go on summer vacation. Living with her father, a hot shot mechanic, she frequently dreams she is Ancien, a princess with magical powers and a magical tablet. When Kokone's father is arrested by the police on word from  a car company executive who wants the driverless technology he has perfected- Kokone's is forced to rescue him- with her dream world crossing into the real world.

This film is freaking awesome. This film moved me and filled me with genuine awe. For one of the few times in my life I watched with film with a heavy heart because my friends who will one day love this film to death couldn't be there to experience it's wonders with me. I wanted them- and you dear reader- to experience this films wonders right now.(It will have to wait until the US release later in the year.)

What is the film like? In someways like every anime and manga you've ever seen. There is fantasy and science fiction, talking stuffed animals, steam punk, mechas, romance, magic and anything you can think of. director Kenji Kamiyama said in the Q&A after the film that he intentionally designed the film to blend our lives, our dreams and the stories we hear, all together because that's how he remembers and se the world with life, his dreams and movies all blurred together. The result is the film will remind you of the best of everything but it then fashions into something new. The more you know the more you'll go "oh that is like X" but its like it not exactly it. Watching the film I could see the references but at the same time I didn't care because what happens is ultimately it's own thing. Kamiyama. In a weird way it's kind of like what Quentin Tarantino does but not as obvious. You could watch this and know nothing and still love it to death.

What I absolutely love about this film is it's exactly like the story Kokone's father tells he about Ancien. its a film with everything in it.

I also love that as you watch the film there will be times when you realize it doesn't make real world sense- but then you realize the film is, what all films are, a shared dream. What is happening doesn't have to make real world sense because it makes sense within it's own world. The characters get that and there is this wonderful line in the third act as the final set piece is beginning when one of the characters simply shrugs realizing that Kokone is dreaming again and they will have to go with the weirdness. On another level the film is a giant dream of sorts, not so much Kokone's but director Kamiyama's. This is the dream he made for his daughter so she would know she could do anything.(See the Q&A below)

Honestly I will be happy to let Kamiyama dream for me if I can get lost in a film as wondrous as this.

I can't tell you how much I want to tell you everything that happens in this film and throw out all my thoughts but that's not right, this is a dream you need to have for yourself.

You have to see this- preferably on the big screen-when you get a chance.

One of the best films of 2017 and I'm going to go out on a limb and say that it's got a shot at an Oscar nomination next year as well.

After the film director Kenji Kamiyama did a 18 minute Q&A. It was a wonderful talk with mostly good questions. He spoke of how the film came together, why he made it as he did as well as related things.

When the talk was done he went out into the lobby and signed the first chapter of the manga adaption that was recently published. He also spoke with those coming up to meet him. The line was so long it snaked from near the front door where the signing table was set up all the way back to the theaters and then down into one of the theaters.

What an awesome way to end the 20th NYICFF.

I can't wait for next year. 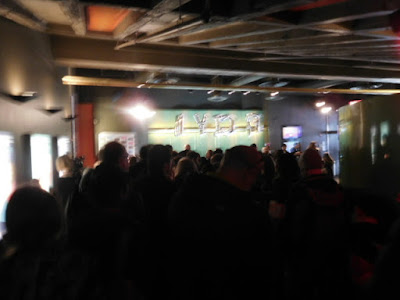