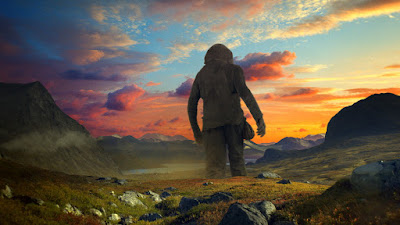 Johannes Nyholm's THE GIANT is a true one of a kind film. It's one of those films that love it or hate it you'll definitely feel as though you've seen something... I'll leave you to determine if that's a good or bad.

Rikard is a young man with a severe facial deformity (Think MASK or THE ELEPHANT MAN). Separated from his mother 30 years earlier when she broke down when couldn't deal with the situation, Rikard has been looking for her ever since. Unable to speak well as well as having other problems he is really good at Pentanque (think Bocce or Lawn Bowling). Playing the game affords him the friendship and connection he so desperately wants. When he heads for the Nordic championship he has dreams of connecting with his mother once more.

I really don't know what to make of the film.

A weird mix of  straight narrative, cinema verite cinematography, sports film and fantasy its hard to know what the film is. I have no idea how I'm supposed to feel. The mix of genres and even it's bending of reality, the ending is a head scratcher leaves me feeling that THE GIANT both was and wasn't for me. In the Was camp is the fact that it is a unique one of a kind vision. Its moving and it occasionally provides some magical moments. In the Wasn't camp is the fact that all of the bits don't always come together and some of this just plain odd.

On some level the film feels truly exploitive. Why did Nyholm decide that Rikard had to be facially deformed?  Don't get me wrong Christian Andren deserves to be in Oscar contention for his roll but at the same time does the deformity need to be there. I'm not so sure and it's the sort of thing that kind of over shadows the rest of the film- it comes across as a distraction. Andren is not deformed and is wearing make up so the look is clearly for effect. However the fact that I'm thinking about it instead of the story kind of means they missed the mark.

Despite my uncertainty about much of the film I do think this is a good one. My questioning what Nyholm's choice is largely out of wanting this to be a great film (there is greatness here) instead of a good one. Very much not for all audiences, this is a definite must see who wants to go off Hollywood and then some

THE GIANT plays at New Directors New FIlms March 25 and 26. For tickets and more info go here.
Posted by Steve Kopian at March 22, 2017