Thoughts on TONY CONRAD:COMPLETELY IN THE PRESENT 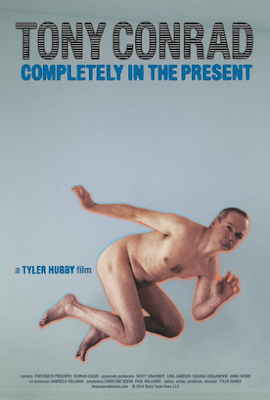 TONY CONRAD:COMPLETELY IN THE PRESENT has left me staring at the screen wondering what the hell did I just see and why didn't I see it sooner. A portrait of the late composer, artist, teacher...mad man...the film is a wicked introduction to Conrad and his life's work.

The film is the story of Conrad from his early days traveling from Baltimore to Boston with stop overs in New York.  While waiting to change busses Conrad would take the subway down town to meet a friend who drew him into the Theatre of Eternal Music which included John Cale, Angus MacLise, La Monte Young, and Marian Zazeela. From there this lead to his working with Lou Reed, Andy Warhol and others. Conrad drifted into film, and other forms of art and performance.

While not for all tastes, Conrad's work tends to be single tonal, avant garde, experimental...basically non-mainstream, this is a truly mindblowing films for people who click with it. His music and performances are trancelike experiences, sometimes with projections that make them like Sigur Ros or God Speed You Black Emperors. His films, such as FLICKER are designed to produce an effect in the brain (which is why you'll want to see this is a darkened theater). I drifted on the music and image and the story of his life.