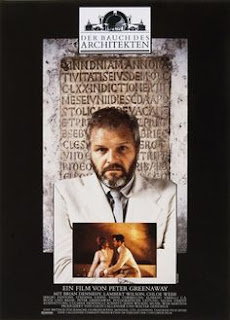 Some of Peter Greenaway's can be overly heady. These are the films that are the work of a mad genius. They are so full of ideas, sound and imagery that one is simply overwhelmed before one even considers the content. These are the films that will either  you make a life long devotee of the director or send you screaming from the room in sheer terror. If you want to know why I think Greenaway is the most intelligent man making films today one need only see these collection of films.

Prospero's Books (1991, 129 min)
Greenaway does Shakespeare
This is the film that got me to go to the New York Film Festival for the first time. A retelling of The Tempest  from Prospero's point of view, Sir John Guilguld does all the voices, its the beginning of Greeenaways use of visual and aural overlay so much is on screen and the sound track I dare you not to be wanting to stop the film within 15 minutes. A masterpiece of the highest order this film presages the MTV generation's extreme use of video imagery on a feature length level (Greenaway's overlays out do anything on MTV or in other films 50 fold). In the 25 years since I first saw the film I have never had the sense I've seen everything in it on any level.
One of the high points of cinema-that's all cinema-period.

The Baby of Mâcon (1993, 122 min)
While Greenaway's films are not designed to have an emotional effect on the audience, this film never got an official US release because a prolonged rape scene towards the end was deemed to be too much (no one wanted to distribute it). A play within a play that's real and yet not is the story of a barren woman who claims to have borne a child. If you've ever wanted to ponder the nature of reality  this film will get you talking for days, maybe years.

The Pillow Book (1996, 126 min)
Wild imagery and overlays goes into the story of a young woman obsessed with writing and books. A stunning visual film is a kin to what would happen if you mashed The Cook, The Thief... with Prospero's Books.

This is his story spread out over three films and 99 suitcases (Greenaway has had a listing of what was in his suitcases on line for years) The films are the life and times of Luper and are some of the wild things he's done. Its a glorious examination of life and cinema. While I don't think the films conclude well, the ride there is exhilarating and one of the best trips you can take in cinema.

The three films need to get a US release.

Goltzius and the Pelican Company (2012, 120 min)
Odd sister film to The Baby of Macon a master engraver who has to convince a rich man to fund the buying of a printing press by having six nights of bawdy entertainment based on the Bible. Its filled with all of the visual stylings that you'd expect from Greenaway (Think Baby of Macon mashed with Prospero's Books). I have seen the film since I first saw it in Russian and its a film I like more than I love. The problem for me is that it reminds me too much of other Greenaway works. Still it's a heady mix and one I need to go back to.


Tomorrow a look at Greenaway's documentaries, shorts and TV work.