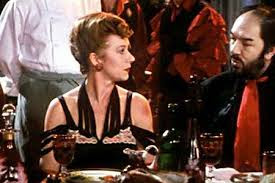 Peter Greenaway's film are unique unto themselves. They are works of art of the highest order. You have to look at them as such. Some are purely works of art and others, such as these films are more normal. These are the films which are easiest to connect to and can act as an entry way into the work of Mr. Greenaway.

Here are some quick thoughts on the films I highly recommend as your best bet into the madness:

The Falls (1980, 185 min)
Greenaway's first feature is a three hour psuedo-documentary about a group of people all with the same name all suffering from the same disease. A carry over from his short films which are kinds of lists, the film transcends its simplicity to be come something more. A hypnotic film where the rapid chain of people drags you along. Somewhere in the middle of it the world falls away and you just ride to the end. Trust me this is a hypnotic experience

The Draughtsman's Contract (1982, 103 min)
Greenaway's first narrative feature was the moment I be came aware of the director. When the film opened in York 35 years ago critics were desperately trying to make sense of the film which clearly had a hell of a lot going on but seemed to be more painting than film.  The film is the story of an artist hired to make drawings of an estate. His self assured attitude collides with the corruption of the estate. Its an odd mix of art and drama that isn't perfect but indicates what Greenaway would be doing over the next three decades.

The Belly of an Architect (1987, 120 min)
The least artificial of Greenaway's films. It plays as a more or less straight drama. Its the story of a dying architect who is in Italy to over see an exhibition about French architect, Boullée who favored oval structures, most of which were never built. Its a stunning mediation on life death with a great performance from Brian Dennehy. If you want to get a taste but not be overwhelmed start here.

Drowning by Numbers (1988, 118 min)
Glorious film of games and numbers about the three Cissie Colpitts, all of whom murder their husbands and cover it up via the help of a coroner in love with them. A wonderful film full of games and counting (the numbers one to a hundred appear in order- a fact that complicated Greenaway's shooting).  This is a film that is wonderful the first time through and even more fun every other time through because you realize all of the things hidden in the film and the games the director is playing. One of the absolute must sees of Greenaway's films.

The Cook, the Thief, His Wife & Her Lover (1989, 124 min)
The first Greenaway film I ever saw is one of my favorite films of all time. Every time I see it it plays completely differently. Nominally the story of a gangster who takes over a French restaurant, it is in fact a mediation on life, society and death.  Its a film that rattled cages, broke records and made Greenaway a director a man to watch across the globe with jokes about it and it ghoulish finale breaking through into popular culture. It is the perfect marriage of Greenaway's image and Michael Nyman's music including his Memorial which drives the film from start to finish. Another must see. (An aside the way Greenaway and Nyman work is Nyman gives Greenaway the music without seeing the film and then cuts to that- which results in some of the best match ups of music and image ever.)

Nightwatching (2007, 134 min)
A fictionalized account of the painting of Rembrandt's  The Night Watch is  heady mix of  truth and fiction. I reviewed the film here. Its also a companion piece to Greenaway's glorious documentary on the painting REMBRANDT J'ACCUSE which will make you look at art in ways you've never ever considered.

Eisenstein in Guanajuato (2015) A return to straight forward story telling after several films set in a soundstage world is the story of the great director and his failed trip to Mexico. One of the best of Greenaway's recent films it is just a great deal of fun. Best of all it appears a sequel is coming about Eisenstein in Hollywood.

There are other films of course but these films are the best way into Greenaway's work.

Tomorrow a look at some of Greenaway's trippier films
Posted by Steve Kopian at January 04, 2017