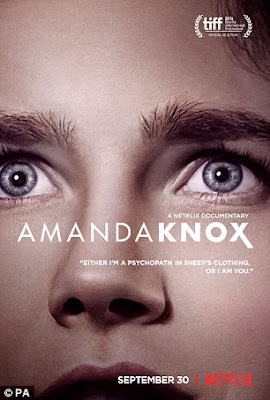 AMANDA KNOX is a Netflix documentary on the entire Amanda Knox affair told by pretty much everyone involved. It is screening as part of DOC NYC's Short List side bar of films that may end up in the running for the Oscar for best documentary.

Don't get me wrong it's not a bad documentary but other than having as it's subject  a sensational crime where the nimrod police try to explain why they went after the wrong person there isn't much here. If you've been following the story you kind of know all of this already and the only selling point is hearing everyone tell the story.

Done in a style that apes Errol Morris's look into the camera and talk to the audience style the film follows the standard documentary approach to telling the story. A goes to B and so on. We have the protagonists telling their stories and a some one outside it all weaving it together. There is nothing remarkable (nor even the remotest possibility she may have been involved even at the start) .

How you react to the film is going to depend on how you react to Knox herself. Coming off as slightly standoffish, she clearly has told this all several times too many, she isn't someone we warm to. There is a wall there and as she says herself she is her own person. The result was I never connected to her. I never warmed to her in previous interviews, and I kind of hoped that I would find a way to connect to her, but I never did with the result that I never really cared.

Though to be honest stripped to the bare truth there really isn't much to the story other than the Italian cops got the wrong person. Watching the film laying it all out you kind of wonder why anyone got caught up- until you realize the cops were beyond stupid and told lots of juicy lies that were more exciting than reality

The film is screening as part of this years DOC NYC festival on November 11 and 16. For tickets and more information go here.

It is also available streaming on Netflix.
Posted by Steve Kopian at November 07, 2016