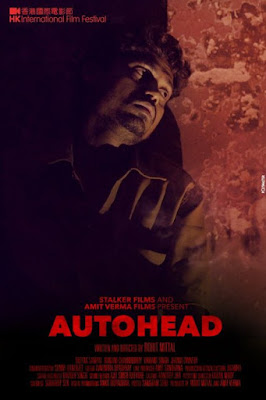 A film crew is following rickshaw driver Narayan Srivastav around the streets of Mumbai. A solitary bird with emotional problems he is focused on the young prostitute he occasionally finds clients for.  As the crew follows Srivastav around he becomes more and unglued (or is he simply opening up to the film crew?) to the point he more and more allows his anti-social side come out.

This bleak black hellish documentary like nightmare will have you squirming in your seat as the sequences go on and on and there is no way to escape the madness at the center of the film. This is 97 minutes in the company of a psychopath and there is no looking away since the camera and the camera crew keep him dead center for most of the run time since most of the scenes are long single takes where Deepak Sampat simply allows Srivastav to be channeled through him from some dark lace in hell.

And Deepak Sampat is the reason that this film works. He's on screen almost the whole time and he manages to hold our attention so completely that we repress the urge to run out of the theater and into daylight. This is one of those performances that should win every award under the sun but which no one will ever touch because he is just that demonic. Its kind of like if the full 150 minute work print version of SILENCE OF THE LAMBS had been released. If that had happened Anthony Hopkins would never have won the Oscar because his Lechter is so much more evil. to the point that audiences would never have warmed to him. Sampat gives such a demonic performance that no one who sees it will want to award him for it.

I suspect that some people are going to have a problem with the fact that this film is essentially long real time takes. Things happen but there is no cut aways. There are dead spots just like life. To be honest I was a bit unhappy at the start with them since I had the feeling that we had seen enough to know the main character, but the fact is by letting the camera run we get to see little moments that we might of missed had it been all good bits. We would miss the real sense of a person behind the eyes as we see the anger rise up behind them. There are small ticks which make the character and his insanity much more real. Cutting away or chopping down the shots would have lessened the impact and I know I wouldn't have been staring at the screen when it ended going "what in hell did I just see and how do I unsee it?" Seriously by the time the film was done I wanted to shower with lye.

This stunning punch in the face with a weighted glove AUTOHEAD played yesterday at  Ithaca Fantastik and is currently on the festival circuit. I highly recommend this film when and if it plays near you, but only if you want to visit real world horror.
Posted by Steve Kopian at November 11, 2016