Joe Bendel looks at Donnie Yen as the Lost Bladesman 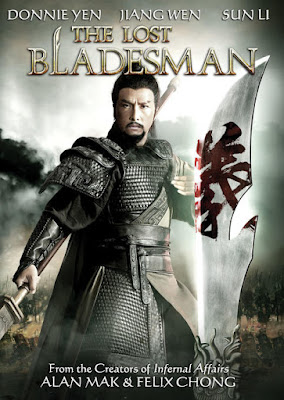 The Guandao is the Gibson Les Paul of spears. It is named after the heroic “Three Kingdoms” General Guan Yu, even though he likely predated the weapon’s earliest documented existence by several centuries. It hardly matters. At this point, most of the stories surrounding the virtuous warrior are largely fiction, but they all boil down to him being the good guy fighting against the despised Cao Cao. However, Alan Mok & Felix Chong (best known for the Infernal Affairs and Overheard franchises) give the legend a twist in The Lost Bladesman, which was released earlier this week on DVD, from Weinstein and Anchor Bay.

Guan Yu (Yunchang) was faithful to Shu Han warlord Liu Bei, arguably to a fault. Recognizing the loyalty and heroism Guan inspired, Cao Cao tried compromise his integrity, but he found he couldn’t corrupt a righteous man. Granted, Guan was willing to make common cause with his nemesis, under narrowly defined conditions, for the sake of the public good. Of course, he never did so at the expense of his higher principles.

Still, a devious schemer like Cao Cao was not willing to give up without a fight. Zeroing in on Guan’s Achille’s heel, the Imperial Chancellor arranged for him to escort Qi Lan, Liu’s intended consort and the love of Guan’s life, back to the Shu Kingdom, forcing them to run a gauntlet of Imperial forces and hopefully weakening them to amorous temptation.

Considering Donnie Yen will soon be even more world famous a Chirrut Ȋmwe in Rogue One: a Star Wars Story, it makes perfect sense a solid, representative 2011 Yen film would finally get a somewhat belated release. Bladesman features impressive work from Yen as both lead actor and action director. His close quarters spear battle with Andy On’s Gen. Kong Xiu is definitely worth multiple viewings. However, the real attraction is watching his fellow Rogue One-co-star Wen Jiang swagger and conspire as Cao Cao. Yet, he also displays such dry wit and sly subtlety, he totally challenges and subverts preconceptions of the notorious figure. It is impossible to reduce his version of Cao Cao to an easy strawman caricature, yet he always looks like he is having a jolly good time.

Regardless, Yen is still the star and he develops some agonizingly tragic romantic chemistry with Betty Sun Li’s Qi Lan. Bladesman is all about denial and yearning rather than consummation, which makes it quite a refreshing change of pace. Although Mak & Chong are more at home in a cops-and-gangsters milieu, they have crafted a classy looking period drama. It boasts a terrific cast, but it is also fascinating the watch Mak & Chong present a complex and humanized portrait of Cao Cao, ranking somewhere between the sympathetic Chow Yun-fat in The Assassins and the scenery-chewingly villainous Zhang Fengyi in Red Cliff. Highly recommended for martial arts connoisseurs and fans of the starry cast, The Lost Bladesman is now available on DVD, from the Weinstein Company and Anchor Bay.