Solid, but fluffy look at a cat lover, her life and cats.  As someone who has had multiple cats in their life I completely under stand Dorian's obsession with the cats and it made me smile. At the same time even at 71 minutes this film is a bit one note- thoroughly enjoyable mind you- but I was kind of done around a half hour in.

Still if you like cats the film is recommended as a pleasant diversion. 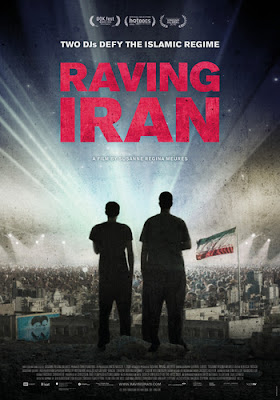 RAVING IRAN
Anoosh and Arash are two DJs who love to make music. Unfortunately the Iranian government thinks that what they do is satanic and are out to stop them and anyone like them from making music. Despite what the government ant the pair soldiers on and attempts to make music even if it's nigh impossible to get their music released.

Damning portrait of Iran's lack of freedom shows how difficult  it is to express yourself in the country. Despite the governments insistence that they are loosening up its clear that they are not- retroactively banning music and not telling anyone. Even the printing of CD covers needs government permission. It totally wild. (And it has some killer music)

Not so much an eye opener as a clear portrait of something we knew was happening and reminder that, all jokes aside, Iran is till very much a repressive society,