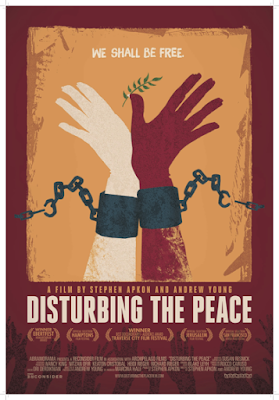 Four former Israeli soldiers from the elite squads and four Palestinian fighters come together to form Combatants For Peace an  organization dedicated to finding a solution to the friction between the two sides.

Told through personal testimony of the eight people, reenactments and news footage, the film charts the course of the founders from hardcore believers in their side to the slow dawning that the way the world is completely wrong. They begin to realize that they really don't hate the other side and that the feelings are a combination of what they have been taught and what they have seen in the media.

The power of DISTURBING THE PEACE is not so much in the individual tales but in the collective realization that they way that they are viewing the world is off kilter. The power is in the weight of the stories together. Its kind of like watching THE GATEKEEPERS from a few years back where the power of the film comes not from one head of Israel's Shin Bet saying the path to peace is not dividing people, but seeing all of them saying that what they are doing is the wrong way to go.

While on some level the film can seem like its covering similar ground as other recent documentaries on similar subjects, one can never be reminded too much  that it doesn't have to be this way. If one needs proof, one only need watch the film to the end where you you will find you have been moved, a lump is in the throat and a tear is in the eye.

DISTURBING THE PEACE gets a special engagement in New York on November 11th and Los Angeles on November 18th, national roll out in February 2017
Posted by Steve Kopian at November 08, 2016