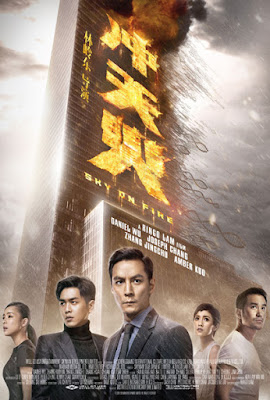 There is a great deal of deliberate confusion regarding non-controversial adult, amniotic, umbilical, and pluripotent stem cell treatments and the hot-button issue of embryonic stem cells. Ringo Lam is about to muddy the waters even further. “Ex-stem cells” (or super-stem cells, depending on the translation) are the Macguffin of his latest action film. What are Ex-stem cells? They are extra-special and can apparently cure cancer just by looking at it. Where do they come from? Essentially from the late Prof. Poon’s missing research journal. The private Sky One clinic is carrying on his work, but his protégés have very different goals in Lam’s Sky on Fire (trailer here), which opens this Friday in New York.

After losing his wife to cancer, Chong Tin-po considers his work as chief of security for the Sky One clinic a personal calling. It is a big job protecting the Mainland skyscraper facility, but he is a hardnosed kind of guy. However, the events that follow the theft of a shipment of Ex-stem cells shakes his faith in the clinic director, Tong Wing-cheung, who sends along some suspiciously thuggish back-up for the recovery operation. Chong also cannot help feeling for Chia-chia and his step-sister Jen. They came from Taiwan seeking treatment at Sky One for her late-stage cancer, but threw their lot in with the hijackers when the clinic gave them the run around. At least Chong still trusts Gao Yu, Tong’s estranged wife and partner, who also studied under the murdered Prof. Poon.

Arguably, Sky is over-stuffed with supporting characters and the ending is supposed to be cathartic, but it is highly problematic from a moral-ethical perspective, if you think about it for more than two seconds. On the plus side, Daniel Wu pretty much puts the world on notice he can take all the steely cool-as-Elvis action protagonist gigs Andy Lau is aging out of, ever so disgustingly gracefully. As Chong, Ringo Wu broods, runs, and fights convincingly and looks good doing it.

Zhang Jingchu also adds some tragic grace as Gao Yu, even developing some tantalizingly ambiguous chemistry with Wu. Joseph Chang Hsiao-chuan and Amber Kuo are enormously likable as the Taiwanese step-siblings, but she really ought to look for a good action role (like fellow Tiny Times co-star Mi Yang throwing down in Wu Dang), or risk getting type-cast as a cute but passive victim.

Call me a hand-wringer, but it really seems like the conclusion holds massively conspicuous implications Lam just ignores. Yet he can get away with it, because deftly turned action sequences always trump pedantry—and Lam still proves he has the master’s touch. Recommended despite the nagging issues for fans of Lam and the popular cast, Sky on Fire opens this Friday (12/2) in New York, at the AMC Empire. 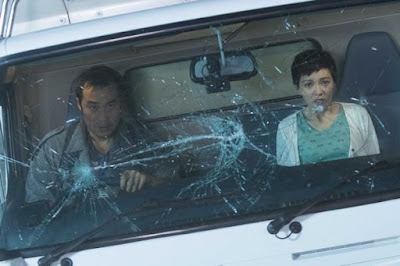