One Dollar Too Many (1968) Thanksgiving Turkey 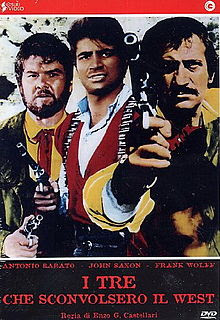 Alleged to be the first if not one of the first spaghetti western comedies I’m still waiting for any sign of a joke to actually indicate that. This is unfunny film that falls flat due to pacing and poor script.

The plot of the film has a crook masquerading as a preacher setting a bomb in a book. The idea is it will go off in a stage allow him to ride in and steal the money. However the mail bag with the bomb is stolen- killing some of the robbers and leaving one alive who becomes the partner of the baddie. The pair sets off to rob the bank but the money gets stolen from them and it then becomes a round robin affair as various combination of the characters get the cash and then lose it again.

A good cast (Antonio Sabato, Frank Wolff and in his only western of a spaghetti variety John Saxon) is game for the double and triple crosses, and had this been played straight (which is how the cast acts) and mined the inherent humor in the situation this would have been an excellent western caper. Instead the cast is saddled with a script and direction which tries to be funny which collapses everything into boredom and pain. Sabato’s loveable rogue is much too silly and Saxon and Wolff come off as stuffed shirts waiting to get a pie in the face which never comes.

Email ThisBlogThis!Share to TwitterShare to FacebookShare to Pinterest
Labels: italy, not worth the effort, western