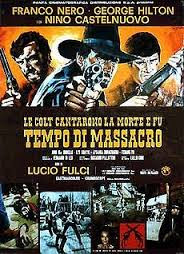 This is possibly the best looking film Lucio Fulci ever directed. Gorgeous western vistas and deep focus compositions fill the film making it an absolute visual delight, an added bonus to a simply super action western.

The plot of the film has Franco Nero called home my a mysterious message. He finds his brother has crawled into a bottle and the town taken over by the brutal son of the town patriarch. The son is tilling, raping and pillaging with no one able to stop him, even his father. As Nero feels the lash of whip an inevitable collision between good and evil is set up.

An excellent heart felt western, made before the genre became bloated and the studios were churning out films with no passion Massacre Time is full of truly evil characters and strong silent types. It’s a film that grabs you from its opening human hunt and drags you forcibly along thanks to great characters and super action. Fulci may be best known for his horror films but its clear he could do considerably more ,

I think this maybe one of my favorite westerns.
Posted by Steve Kopian at November 02, 2016