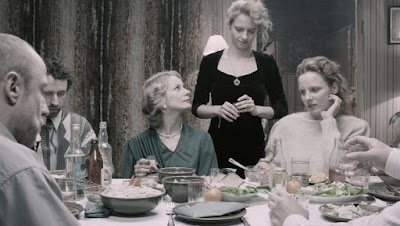 Playing more like four separate films joined together UNITED STATES OF LOVE is a heavy look at love lust and longing. Its a film where we look at the quiet and not so quiet desperation of four women in a country opening to the west (it's set in 1990ish) and going capitalistic. One woman lusts for a new priest. Another is having an affair with a married doctor. A third forms an attachment for a young woman. The fourth finds the downside of striving to be a model in a free economy.

Nicely acted by everyone concerned, this is a very good look at a world and lives in change. We have develop a real feeling for the women and their plight, though the obsession for the objects of their desire shown by some of them is more than a tad creepy. Logic and reason kind of get tossed aside by it but at the same time director Tomasz Wasilewski is juggling a lot of balls in the air making comments not only on the lives of the women but society in general.

I liked it a great deal.