National Bird (2016) opens Friday and it's worth seeing 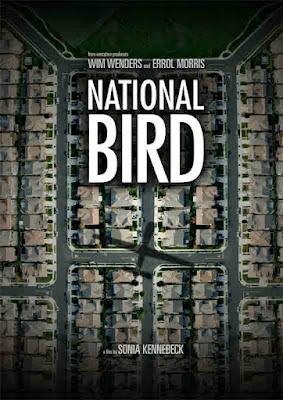 But here's the rub despite seeing some 89 other films, most of which have faded from my memory, I still remember NATIONAL BIRD.  Despite my reservations concerning the film it has stayed with me and forced it's way into my brain. While I don't remember the first half discussion about drone use, I sure as hell remember the second part where we see the damage they cause. Its so arresting that when I was asked to revisit the film for it's theatrical release I said yes.

Below is a slightly modified repost of the review that ran back in April during the Tribeca Film Festival. It explains briefly my feelings for the film

NATIONAL BIRD is half a disappointment and half a kick ass film. For me the first half about the effects of drones in the US's current wars is a been there and done that tale of the damage making life and death decisions causes even far away. We've seen variations of this before in numerous documentaries and several recent fictions films (some of which even have played here at Tribeca) and the result was I kind of tuned out.

It wasn't until one of the interviewees goes to Afghanistan on a humanitarian mission and we meet victims of the drone war that the film springs fantastically alive. Here at last the film finds its footing and we are kicked in our asses. What we see is absolutely arresting, and even if we've seen it before it still rattles us to the core.  I can't help but wonder what this film might have been had the film been focused from the start on the human cost of the robotic agents of doom. Its this later section of the film that makes it a film worth you time.

Reservations aside this is worth seeing.