A bleary eyed look at NYAFF 2013 Day One: Friends, Films and Ahhh ( Brief word on JURY, BEHIND THE CAMERA and TALES FROM THE DARK) 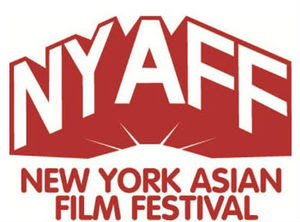 It's just about 2am as I'm writing this which means I have to be up in a couple of hours to go into the city to be part of a press conference on Korean films at the NYAFF. We'll see how it goes...(And bear with me if this is jagged I'm just trying to get it all down)

Yes, the festival is finally here. Yes, we can all hear the best sound of summer, namely Grady Hendrix introducing any film without a mic. I hear him and I instantly mellow out since it means I've come home once more.

Going in this tonight I didn't want to go. I couldn't figure out why I was going. I already have seen and reviewed half the films at the festival, I don't want to see more Asian films, and then I walked into the lobby of the Walter Reade and saw Rufus talking to Earl and I knew why, the people. And while right now Mr C is off tending to some vitally important matters and Mondocurry has gone off on a top secret mission, I know both will be making appearances soon.

In the mean time I got to reconnect with some other friends. Alec returned from his secret mission to begin wading in to the festival. He was there for one film but he's locked and loaded for more so I expect some interesting tid bits- like what to see or avoid... Hubert was there as well and as always is good company.

I met Jared from Bullets over Chinatown. In introducing him to Hubert I forgot the Bullets name and instead stumbled, giving the web address which is http://inthemoodforgwailo.blogspot.com/ which something that amuses the hell out of me. And by the way if you aren't reading his blog you aren't learning anything about Hong Kong and Chinese films. I'm in awe of his depth of knowledge and his presence on Facebook is one of the only reasons I'm considering firing up the Unseen account.

And Chocko made an appearance- arriving just as TALES was starting, whapping me to let me know he was there, and then bolting before the end credits finished too afraid to let the ghosts get him. Is it any wonder that he is still considered a man of myth and legend much like the Yeti or the Loch Ness Monster but with more facial hair?

I should say that I do have some photos from tonight but I'm going to post them in the next day or so when I get a free minute.

I'm also going to do more in depth reviews of the films tonight but for the sake of letting you in on what happened I'm going to say a few brief things.

First up was was JURY. This short film is a wicked look at a film festival jury trying to decide which film should get the award. The actors are real people playing themselves (and please forgive me for not telling you now who everyone is I'm too damn tired). Grady said that the film is based upon what really goes on at the film festival. Its damn funny and on target of what its like behind the scenes at press/industry  screenings.

That film played with BEHIND THE CAMERA OR WHY MR E WENT TO HOLLYWOOD. This meta fiction/documentary was made during the making of a ten minute short film by E J-Yong. The premise of the feature is that technology is such that he could go to Hollywood and direct a film in Korea from there. What happens is the film. Filled with great Korean actors, actresses and directors this is a wild film where you can't tell what is and isn't real. Frankly I don't care because this piece of metafiction or documentary or something is one of the best films I've seen this year and one of the greatest films on film ever made. Its a work of genius. Its so good I may change my plans to see it again Sunday when it plays again. This needs a full review.(and I feel bad for anyone who wasn't there)

After the film there was a Q&A where Grady asked all the right questions  that helped the director explain whats real whats not and what its like to direct when you're an ocean away.

The world premiere of TALES FROM THE DARK was preceded by the usual give away- except this being a horror movie which meant that that they gave away a Jackie Chan disc plus two ghosts from festivals past - namely more DVDs  of Hong Kong Godfathers surfaced.

TALES needs a full review unto itself as well. But the short version is that this is three ghost stories.

The first, Stolen Things, concerns Simon Yam (who directed) as a handyman in search of work, who it is said can only be hired by ghosts. Its a creepy tale that has shows Yam has great promise as a director.

The Second is I think called Word in the Palm concerns a man who tells fortunes for a living. He is trying to get back with his wife and agrees to close his shop- but he's seeing ghosts again and gets mixed up with a couple being haunted. A mix of comedy and scares this is a really good film.

The final film was by Fruit Chan. I didn't catch the title (I'll have it for the full review) and concerns the act of essentially cursing one's enemies on on particular day of the year via proxy villains. a mix of humor and horror the film builds to tension to the point where some late humor kind of makes it a tad less than it should be. Still it moves you.

Over all the film is that rarest of rare birds- an anthology film where all the parts work- and better yet are scary.

For now know that with the movie done Hubert and I walked to the subway and headed home. I left him on the platform waiting for his train while I dashed to catch an LIRR train home. I made it eventually after some delays---

And now to bed. I have- hopefully- a press conference in the morning and more movies to see.
Posted by Steve Kopian at June 29, 2013

Email ThisBlogThis!Share to TwitterShare to FacebookShare to Pinterest
Labels: NYAFF 2013