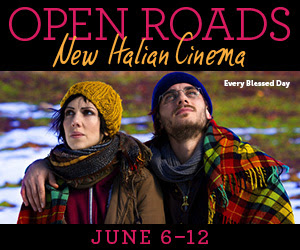 The lobby of the Walter Reade Theater at Lincoln Center was all a buzz before the opening of Open Roads the Italian film series that was taking up residence in the theater complex for the next week. I was running late when I arrived and I had to fight my way through the throng of well-dressed people most of whom where speaking Italian. There were also several photographers, only one of which seemed to be from the American press (Brad from Festival Traveler).

Inside the theater things were hopping as English and Italian mixed freely. There was sense that something special was going to happen.

Close to show time a huge crowd of people, all special guests, actors, actresses, producers and directors made their way down. The few press people followed them in snapping pictures. I was there on my own dime, not so much covering the event, rather just there to see the movie(Hey, it happens occasionally). As everyone got seats and the press asked the VIPs some questions in Italian I took out my camera just in case something happened.

A shift in the light indicated they were ready to start. Dennis Lim, one of the programmers took the stage and made some introductory remarks and said thank you to the sponsors. He then turned the evening over to one of the founders of Open Roads, who made a few remarks and then invited all of the filmmakers to the stage (pictures can be found at the Unseen Films Tumblr page here). Three of the invited guests were in transit in three separate cabs from Kennedy Airport. It was a comment that made me think of the trio being in some sort of race through New York traffic.

After all the introductions the stage was cleared and the film started. 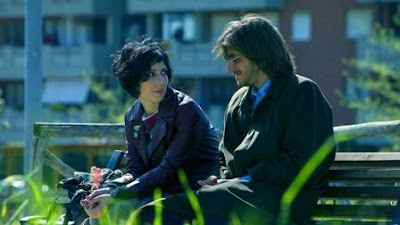 EVERY BLESSED DAY is the story of Guido and Antonia. He’s a bookish night clerk at a hotel, she works days as a car rental agent and sings part time. He loves his family, she stays as far away as possible from her own. As their friends and neighbors begin to have children the couple decides that perhaps they should get more serious in trying to make a family. Going to the Pope’s gynecologist the couple tries to one more to their family.

Following the course of about a year in the lives of the couple we watch as their fortunes go up down and sideways. It’s an amusing comedy drama that never gets too serious, despite feeling that there is some grand dark tragedy just around the corner (a spoiler- there isn’t) the film is simply good time with good people who hit a rough patch. Leads Luca Marinelli and Federica Victoria Caiozzo in arte Thony, who provides the songs that make up the score of the film, are a wonderful pairing. Seeing Marinelli after the film it’s hard to imagine that the guy I saw after the film was the same one in it. He’s an amazing actor, as is Thony who we were told in the Q&A hadn’t acted before. It’s a lovely film, more smile inducing then laugh producing, with just enough seriousness to keep things interesting. (and I’d love to tell you about a couple of scenes towards the end but I can’t spoil them they are just too wonderful to do that.)

After the film Luca Marinelli came out and did a brief Q&A. He was utterly charming and seemingly a little nervous. Early questions involved his preparation for the film- had he read the book? how much of the role was him? He said he had read the book and the role reflected him in some ways simply because he was performing the part. Had someone else done the role it would have had bits of them in the role. One woman asked him why it was that it seemed that until this film most romantic comedies focused on older people (actually she wanted to know why more romantic comedies didn’t focus on good looking younger people… and she wanted to know if he had been in anything else…which came after a discussion of his working with other directors). For the life of me I really can’t remember what else was discussed since there was a great deal of joking around which wa much more interesting than the questions and the answers. 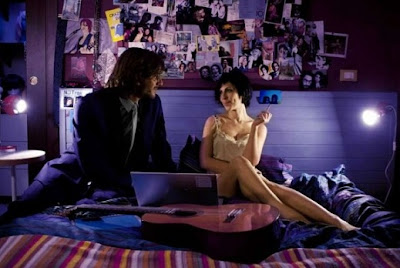 After the film I headed out and headed home. I had a ticket for Marco Bellocchio’s DORMANT BEAUTY but things had changed between the time I purchased the ticket and the screening so I had to fly. Outside I ran into a woman who was trying to sell her own ticket to the screening. A friend of hers wasn’t coming which bummed her out since she loved the film so much she wanted to share it. We talked for bit and she tried to sell me on the idea of going back in and seeing the film, but familial commitments kept me from doing so…so I headed off into the night and the rain.
Posted by Steve Kopian at June 08, 2013